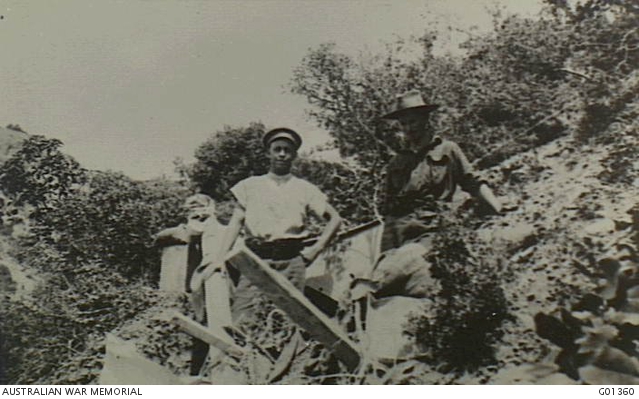 A number of Australian dugouts fell foul of Turkish artillery shells, including
the above in July 1915 - Bombardier Sparkes' & Gunner Hurst's dugout sufferred
a similar fate (below).
[Courtesy of Australian War Memorial - G01360]

had another experience today. I was sitting down slowly in my dug out near our gun and swish bang a shell lands just above me on the bank of the dug out. A tremendous amount of smoke dust and dirt was lying on all sides and I was on my feet and really had to fight my way out to clearer air. It was wonderful that I escaped without being wounded or buried. Gunner Hurst who sleeps below me fortunately was away otherwise he would have certainly been buried.

The Turkish aeroplane which flew over our quarters this morning dropped darts as well as bombing.

From our lookout over the Turkish countryside other new long trains of camels which seem to be largely used as a means of transport. Speaking about camels reminds me of a criticism I read one time of these animals. It was something to the effect that camels on sunlit sand – and at a respectable distance are I think always decorative. From an artistic point of view it is always advisable to keep them there – namely on sand and at a distance because nearness to the workaday camel quite takes the enchantment from the view of him. To begin with he is mangy from his [illegible] deck to his splay feet and out of every ten square inches that ought to be covered with hair he wears nine square inches [illegible]. He emits evil noises and an evil smell. When he bites - which he does with his lips, not teeth – the effect is very much the same as having one’s finger slammed into the hinge side of a railway carriage door. He is as ungrateful as a Greek and as trecherous as a Turk. A horse will not drink after him; sheep avoid the pasture he has fouled and even a Jackal will not eat him when he is dead if there is other carrion within reach. You know we’ve seen so much of the poor camel since our stay in Egypt and now he intrudes himself before our eyes in the eyes [illegible].

This evening we made an attack on the Turkish trenches and several were captured. All the plans were carefully laid and our infantry cheered as they charged the enemy’s position. Our part in the scheme was to bombard a certain part of the right flank trenches of the Turks and we commenced to open fire about 10 PM. Our guns pounded forth and the enemy replied to us shot after shot. Fortunately for us all their shells went high but they made it warm. Of course we fired indirect and had all our angles laid out on to a light and in this way we could engage certain places of the enemy lines at night. The moon shone out about 1am but we still pounded on till 3am when the fire gradually eased down. Outside of a jam of our breach and the siege lamps not giving satisfaction our arrangements went well. Several big mines were fired by our Engineers at the commencement of the action and the report of the explosion was tremendous. We heard that a number of Turks were buried beneath the fall of earth where the mines were fired. 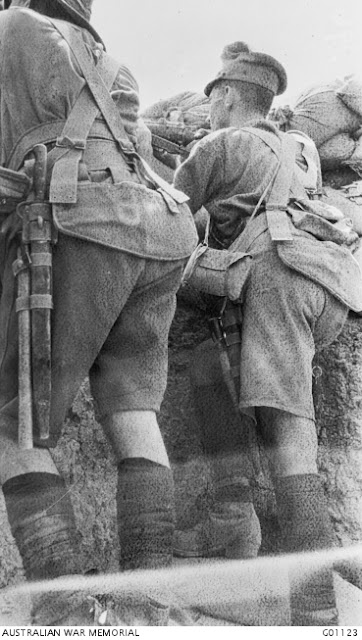 A photo taken in the trenches by Captain C. E. W. Bean, not long prior to the pending
Australian attack on the 31st July - "Two of our men are here shown in a front line trench
ready for any emergency. Owing to the excessive heat the men discarded their tunics and
also wore shorts. This provided a little physical relief during the long hours necessity
compelled them at times to watch and wait."
[Courtesy of Australian War Memorial - G01123]

0920 HUGHES BATTERY was shell somewhat for about 1 hour.  Amongst the shells fired at us were a number of rounds of 6" Lead coated ones, several of which fell on the parapets of the communication trenches between the guns causing a big displacement of earth.  No damage or casualties were sustained.  During the series an explosion or premature burst was seen to take place in the OLIVE GROVE causing a blast of white smoke to appear.  A bearing was taken + plotted which gave us the position of the gun as 212.W.6.  This was found to agree with a bearing of a furrow caused by one of their shells.  The above information was reported to Bde Hqrs.

1000 Several enemy shell about 6"  lead coated, fell in the trenches between the guns.  No damage was done + no casualties.

1350 No 1 Gun engaged a enemy working party seen in square 212.V.2 causing a cessation of work + getting some good effective bursts on them.  4 rounds were fired and the target was registered. 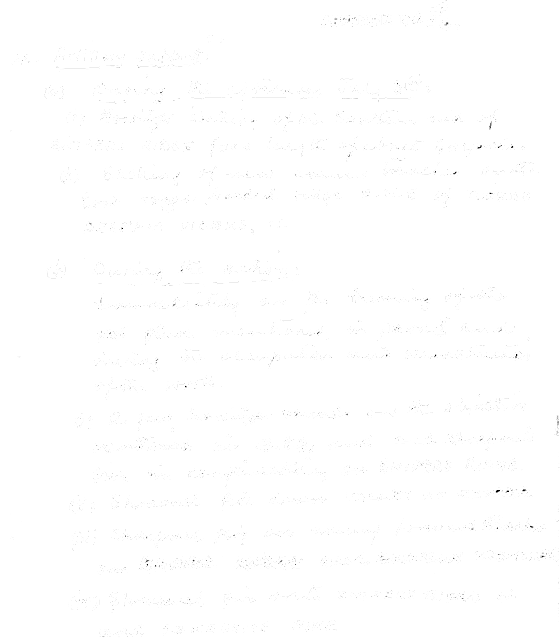 'Operation Orders' for the night of the 31st July relating to the Artillery requirements
for the attack, listed as Appendix 56 in the 3rd Infantry Battalion's Unit Diary - under
"During the Action" Sections (i), (ii), (iii) & (iv), the bulk of the shrapnel provided for
Sniper's Ridge, Valley of Despair, Harris Ridge, Echelon Trenches & Lone Pine, was
brought to bear by the 7th Battery's field guns.  The above is held by the Australian
War Memorial,  & is kindly reproduced after publication by the 9th Battalion AIF page,
where a parallel 'day-by-day' of a fellow Queensland Infantry Unit is currently running.
[Courtesy of 9th Battalion AIF - Facebook Page]

Hostile aeroplane over at 7.10 AM. Dropped many darts in gully just below our H.Qrs Camp, and also 3 bombs, one close to Burgess’ Headquarters, one in valley to Westward and one on razorback ridge. Apparently they were trying for Burgess’ battery. Late last night received part II orders from Base, showing our casualties.

During afternoon "D " battery 69th Brigade Howr shelled Snipers Ridge preparatory to venture at night by 3rd Infantry Brigade. Gen MacLagan, self and Major Brown with also Major [illegible] of How battery thoroughly examined country. The General explained project for the evening, which was to capture Turkish "Despair" trenches. At 10.15 PM operation commenced. Howrs put in a few rapid rounds, mines were exploded under enemy’s trenches and all guns of 7th Battery as well as one gun of 8th Battery engaged various objectives with the object of keeping down enemy’s fire. We were very successful. Olive Grove and Wine Glass Batteries put up a heavy fire but it was generally badly aimed and 9th Battery, helped by Lowland 5" Howrs kept them under. I watched the operations from my observing station. Very pretty sight and an awful din. Infantry took trench and commenced to reconstruct it. I went to bed at 1 AM.