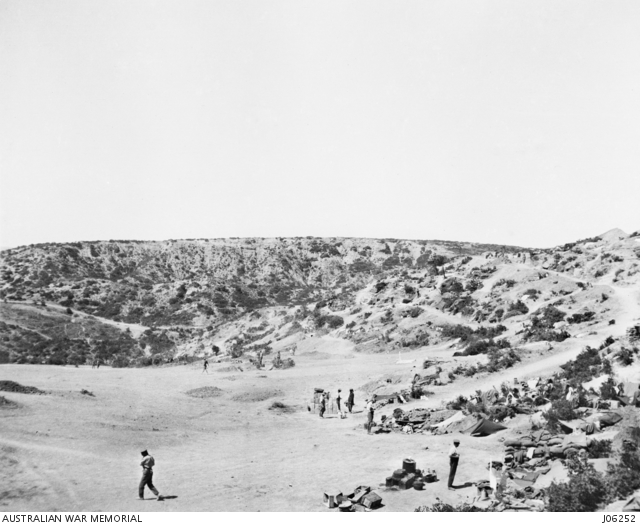 The 7th Light Horse lines along the edge of Shell Green, just below the
7th Battery gun positions on the ridge above.
[Courtesy of Australian War Memorial - J06252]

Thamothrace Island near Embros. This morning I was temporarily attached to another gun as there was only one N.C.O. there. I spent some time in making a comfortable Dug out which faced out to sea. It was a delightful outlook from the side of the ridge. We were to draw fire at 5 P.M. from our gun if any target appeared. Unfortunately no opportunity was given to us by the enemy. A 6 inch Howitzer just near us fired several shots and as the concussion is fairly strong we were advised to lay low. I managed to get down the ridge to my dug out but my knee gave and I had to be carried up to Dr Marks who tried to get the muscle back. He succeeded in relieving it a little and I was take back to rest for the evening.

1300 No 4 Gun fired two rounds at a party of the enemy working on SNIPERS RIDGE at a range of 675x which were very effective.

1730 No 4 Gun fired three rounds enfilading a communication trench on SNIPERS RIDGE which were effective.

No 3 Gun engaged an observing party about 20 yards WEST of CEMENT EMPLACEMENT at a range of 2100x.  Nine rounds were fired four of which appeared very effective + the observers disappeared.

1845 No 4 Gun engaged a machine gun which opened fire from SNIPERS RIDGE at a range of 850.  The Machine Gun was silenced.

A big crowd working on 4".7 emplacement and roadway. Timber and bags obtained from Engineer stores. Round the guns during the day. Several shell fell close to our Headquarters, one shrapnel shell putting bullets through the waterproof sheet awning to my dugout. Batteries of Brigade putting in casual rounds all day to harass enemy.