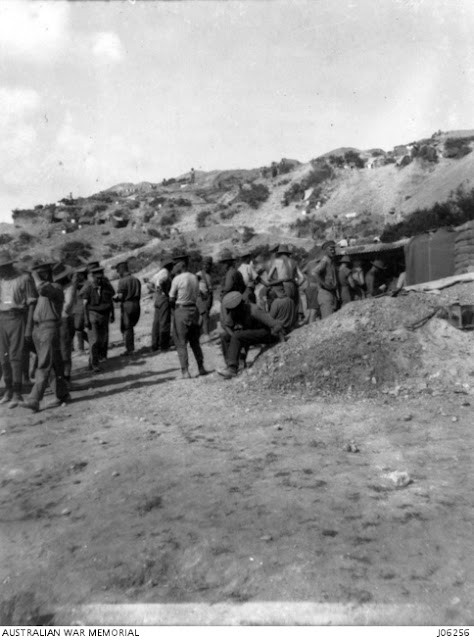 Men lining up to get their cholera inoculations at a station behind the main
firing line - Bombardier Sparkes received similar (below).
[Courtesy of Australian War Memorial - J06256]

I spent a bad night last evening. Fearful stomach Pains. Had little or no sleep till early morn. Very early our officer Mr P. J. Ross with Howarth & Matt & ohs left for Imbros Isld for a short spell. So far I am left in charge of the gun & detachment. I was inoculated yesterday for cholera epidemic.

A German Taube dropped several bombs over our camp this evening. Luckily one of them did not explode. The one dropped on the beach exploded without incurring any casualties.

1715 No 4 Gun engaged a Machine Gun on SNIPER’S RIDGE.  Three rounds were fired which appeared effective.  The attachment were then withdrawn as the enemy had brought effective shell fire to bear on the Gun smashing the left gun wheel.

1910 The working party engaged this morning in square 202-J-6 were again observed + engaged by No 1 Gun which fired 3 rounds with effect.

About 6AM an Enemy’s aeroplane passed over our position and dropped two bombs, one large one landing near the beach and doing no damage, the other smaller one landed on "Shell green" about 300x from my Headquarters. This bomb partially buried itself in the ground and did not detonate. I secured it, and forwarded it to Divisional Headquarters, after removing the fuse which is most interesting. Party of 26 from 3rd FAB left at daylight for Imbros for a few days rest. The 5" Howr put some shell into Valley of Despair during the afternoon.

We evidently made things uncomfortable for all their guns opened on us, doing however no damage. Late in the evening a chance shell fell into No 1 Pit 8th Battery, killing two men and wounding another. Another shell fell into 7th Battery no 4 gun pit, damaging a wheel but causing no casualties. Lent horses to assist in placing newly arrived 5" How battery, and lent men to assist in moving 4".7 on to platform in actual emplacement. Should be ready for work tomorrow. Man wounded in BAC also 9th Battery. Col Hobbs discussed rewards for our Artillery with me. Adjutant Mountain Artillery Brigade brought me a confidential letter from his O.C. re operations on 28th June. Switchboard made for Major Stewart also Major Miles. 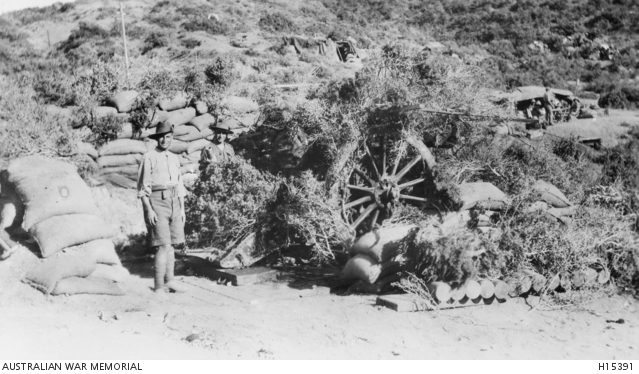