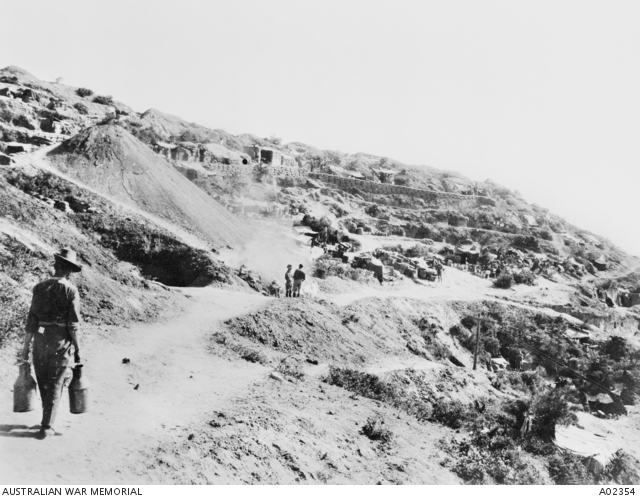 View of the Headquarters of the 5th and 6th Australian Light Horse Regiments on the
right of Rosenthal Ridge at Anzac, with a growing spoil pile taken from the tunnels and
underground trenches to the left - as mentioned by Bombardier Sparkes below.
[Courtesy of Australian War Memorial - A02354]

It was a quiet night last evening but the Turks made up for it this morning, as they commenced to shell us from all quarters for about an hour starting as early as 4am. A very big gun opened fire on us later and landed large shells towards the beach.

War is going to make old men of a lot of our lads.

Our infantry has done a lot of sapping tunneling underground from one trench and coming out on another ridge where further trenches are cut when out of view of the enemy. It is hard and tedious work as all the earth out of the tunnel has to be carried out and to the back of the firing line in small bags. In this way we are often all able to sap up to the enemys trenches and blow them up – often men and all – just as they would do to us. 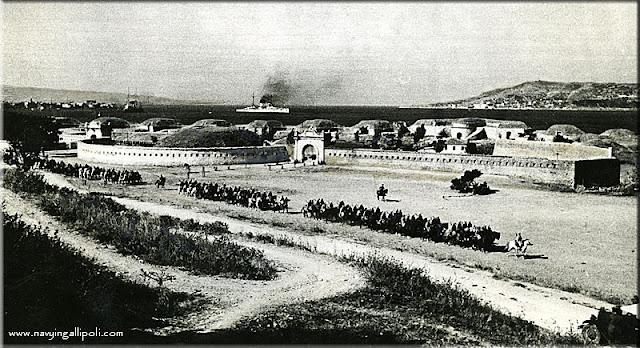 Fort 24 (Anadolu Mecidiye) pictured in the early 1920's - as per Col. Rosenthal's diary
entry below, it was suspected the massive projectiles rained on the Anzac positions came
from this Fort, which was armed with 2 x 111/32 inch & 3 x 1015/64 inch guns.
[Courtesy of Naval Operations in the Dardanelles 1915]

A terrific artillery cannonade opened this morning at 4AM. I was awakened by shrapnel bullets and fragments of shell falling at the entrance to my dugout. Very little damage was done generally, but one shell burst over 8th Battery, killing a Corporal and wounding three other men. We located two of the enemy’s guns near Gaba Tepe and firing 8 rounds with the 5" Howitzer registered them. Cannonade ceased about 7 AM.

A little later 8 rounds of 11" shell came over from the direction of Maidos and landed near the Beach and Army Corps Headquarters. As Fort 24 on the other side of the Dardanelles (the Narrows) has three 11" guns mounted we conclude it came from that Fort. A strange incident happened today which May later be explained. All our trawlers and mine sweepers had made a circle round our shipping and had possible laid mines. At about 4.30 PM a huge column of water was lifted up, resembling the effect of a mine explosion, then something moved rapidly close under the surface of the water, getting gradually slower and then stopped, apparently sinking. For some time smoke and what appeared to be air bubbles kept rising to the surface. I am of opinion a Submarine has struck a mine and foundered. A huge column of smoke was seen south at 6.18AM in the enemy’s country. Looked like an Ammunition dump being blown up. 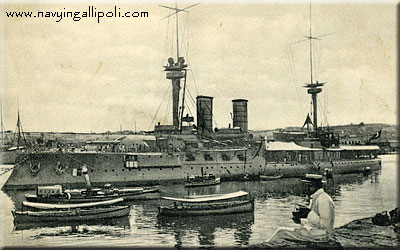 The Turkish pre-dreadnought battleship Turgut Reis, purchased from the Greman navy
as the S.M.S. Weissenberg in 1910 after she saw action in China during the Boxer
Rebellion - whilst her action in the Dardanelles was limited, she boasted 4 x 11 inch
40 calibre guns & 2 x 11 inch 38 calbre guns, & was suspected as the possible
bombardment culprit by Captain C.E. W. Bean below.
[Courtesy of Naval Operations in the Dardanelles 1915]

[Extract] By the bye the Turks must surely have some information of our doings.  The other day when one of our guns was to have opened in a concealed position from a tunnel the moment the mouth of a tunnel was opened before the gun could fire they put two shots down it!

The sensation of the day was the opening up of a new gun.  We are getting some new guns too, but the 6 in or 4.7 or something for which Hobbs asked a long time ago; but they had a surprise for us this morning.  Shortly after breakfast there was a noise like a as though the sky was a gigantic piece of brown paper + someone was tearing it.  They tore it down towards the sea + then plump! + a geyser rose near a tug off the beach.  I thought it was something gone wrong with the 6 in gun at Kojadere that had hit Coffee on the head in our kitchen two days before without really injuring him.  But presently down came the same noise again + it went into the sea - this time shorter about 40 yards beyond + outside the end of the pier.

Three minutes later it shortened again + went in off the point of the beach south of the pier + outside of it.  Cunliffe Owen said it was a 6 in gun on Kilid Bahr Plateau - but this explosion in the water blew out onto the beach the back of an 11.2 in shell.  The the gun moved in again - clearly to get the beach or the pier.  But this time she hit the hilltop.  She raised an There was a huge crack + then for about 10 seconds things were dropping in the sea - all over the anchorage within ¼ mile of the beach raising big white splashes.  One wondered when they would finish dropping.  After you thought they were at an end something would still come down.  Then They hit the hilltop four times - the last time further back + the things dropped in the valley by H.Q.  The I saw one of them on the roof of a dug out - a stone about twice as big as your fist.  Anderson, the Brigade Major of the artillery, who was watching it with me wondered if it were some new form of shrapnel - "some new frightfulness, I suppose" he said.  "That would jolly soon stop them landing stuff in this anchorage at all," he said.  But it was just stones.
Presently a message came in that a warship with 2 funnels + 2 masts had been seen by an aeroplane firing between Maidos + Chanak + that was clearly her.  She was evidently trying for either the pier or the beach.  Probably Turgut Reis or Barbarossa.

The other day a shell landed in the dentists dug out + covered the hillside in with false teeth.  We want dentists badly - now that they let through men whose teeth aren't perfect.  The NZ people have a Corps of them but we haven't.  A man who breaks his teeth is useless on biscuits - + has to go back to Alex to get some more (N.Z. dentist now at Imbros - just setting up - but probably can't look at a tenth of the work)  and with our base in its present condition it would be as good to send him to Alex Australia.