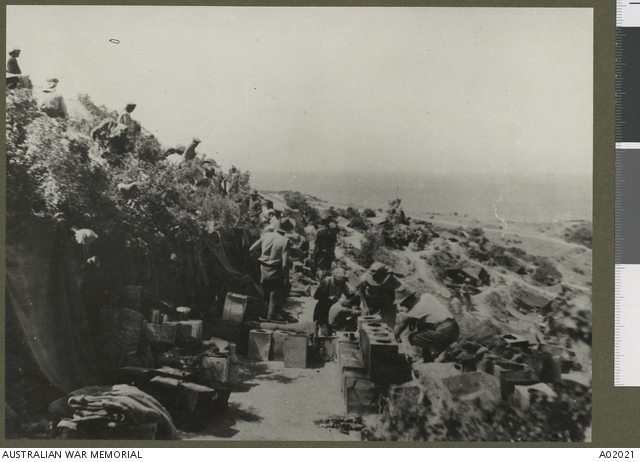 Men returning to the cooks lines above Shell Green, just behind the firing position
of the 7th Battery - Will Sparkes was likely on one of these water runs below.
[Courtesy of Australian War Memorial - C01796]

Went for water on beach. Long wait. Absurd rules could not secure before 7am. Lovely swim at dusk and coming back up ridge a fuze of one of the enemy’s bombs fell at my feet. Another one of the many miraculous escapes. The enemy sent up aeroplanes early morning for the last few days and dropped bombs on our camp. We had many anxious moments waiting till he passed over.

1545 No 1 Gun fired 3 rounds at enemy parties seen getting water from a well in communication trench NW of Y JUNCTION.  Good low bursts were obtained at 1800x

An Aeroplane over at 6AM. Thought at first it was hostile, but later discovered it was one of our own. Two batteries of Lowland Brigade now in action. My section now contains my Brigade of 18 prs, Major Miles Heavy Battery, two mountain guns, two 5’ How batteries, Lowland Brigade and one 5" Battery 69th Brigade, a total of 24 guns. Hostile aeroplane flew over during afternoon, dropping two bombs on the edge of water at Brighton Beach. Howr Battery shooting at Echelon Trenches at 5PM. At same time three cheers ran along the line because of victory before Baghdad. Provided working party of 75 for 58th Division guns, Miller on H.Q. switch and phones all day. Arranged for new lines to new D.A. Station in case of an advance. Interview with General MacLagan re bombarding Snipers Ridge works – Lt Teare transferred to 2nd Brigade. Capt Crisp sent off last night to Hospital.