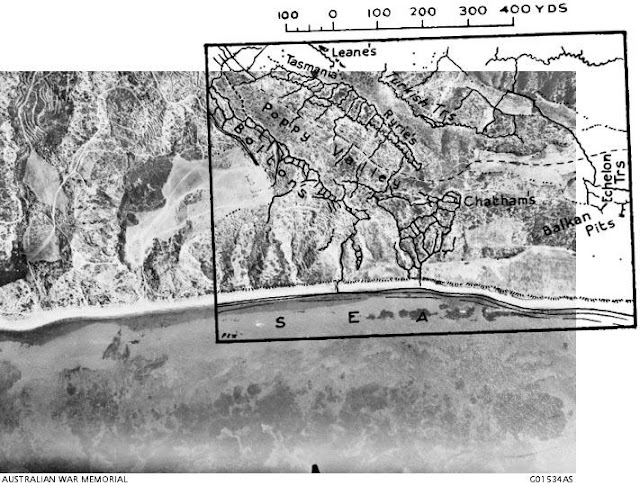 An annotated overlay of a period Gallipoli aerial photo, showing the various
Australian positions - the light section just above centre left is Shell Green,
with the 7th Battery's gun positions situated in the fork, just to above the
apostrophe in "Bolton's" - Chatham's Post, visited by Col. Rosnethal below,
can be seen at centre right, with his his intended target of Echelon trenches
seen a far centre right.
[Courtesy of Gunner W E C Haseman 1737]

The Guns of HUGHES BATTERY did not fire.

The 4th Battery of the Lowland Brigade arrived during last night. I supplied 8 horse team and 20 men to assist in disembarkation and bringing guns to position. Lieut Onslow ADC to General Birdwood killed by shell during night. General Cunliffe Owen, Col Hobbs and Col Shepherd (O.C. Lowland Brigade) present at my Headquarters. Duties of Lowland Brigade defined and allotted. Olive Grove 6" Howr. dropped a number of shell in our direction. No damage done. Another Heavy Howitzer opened fire from direction of hill 971, and dropped shell in vicinity of No 2 6" How. Three men were injured by one shell.

Wine Glass battery did a fair amount of shelling during the day against trenches in vicinity of No 2 6" How and my observing station. Practically no damage done. Visited Chatham Post, with Col Harris and Mountain Battery officers regarding shelling of new Echelon Trenches. Decided Howitzers could do best work. Arranged for Howrs to shoot during afternoon.

[Extract] Jock tells me that a man in his battalion a couple of days ago started a duel with a Turk, each stood breast high above the parapet + blazed at the other in turn +, when he missed, the other signalled a wash out.  All of the line stopped firing to watch them.  An officer came along presently + made our man get down but he got up again as soon as the officer passed + started anew.  Presently a sniper Turk from some way down the line to the south shot our man dead.