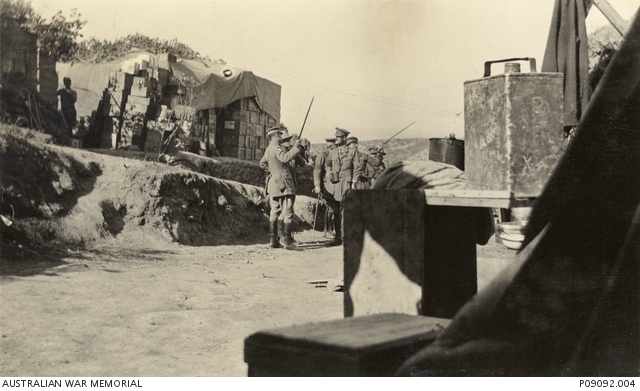 General William Riddell Birdwood & Australian Officers on one of their regular
visits to the trenches at Anzac (as mentioned by Col. Rosenthal, below).
[Courtesy of Australian War Memorial - P09092.004]

A quiet morning. Weather still hot and flies as bad as ever.

Just a bit of Prose I put together to-day.


Orders to move were hailed with delight
Hurrah Hurrah They cried with all their might.
It meant farewell to the desert plains
The heat, the flies and other pests
To put our boys to a more serious test

Around No 1 Section with General Birdwood inspecting gun emplacements. He informed me 5" Howrs from Australia were approved. Col Christian’s Brigade is to be attached to the three new Infantry Brigades arrived in Egypt from Australia and with a Howr battery this will be their total artillery for the present. He told me scheme for us was to advance, establish ourselves across the neck from Gaba Tepe to Maidos, and then force the Turks on the Southern end to either attack us or surrender. Our submarines are effectively preventing the enemy using the town of Gallipoli, and stores and men have to be ferried over at Chanak.

Generally a quiet day as far as the enemy was concerned.

[On the 7th July, Col. Rosenthal received the below correspondence from
Lieut.-Col Cyril Brudenell Bingham White, General Staff, via Col. Joseph
John Talbot Hobbs, Officer Commanding 1st Division Artillery - this was
in reprimand for indirectly allowing publication of a private letter written
to a friend in London, whilst recuperating in the Heliopolis Hospital in mid
May, mentioned here on the14th May.  Below is a newspaper cutting &
transcript of the communication, both of which have been taken directly
from Col. Rosenthal's Service Dossier held by the National Archives of Aus.] 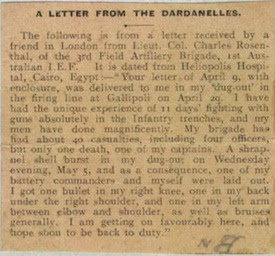 
The enclosed is an extract from "The British Australasian", dated 27th May.  I am to direct you to inform Lieut.-Colonel Rosenthal :-

(ii) that reference to the position of guns and mention of casualties constitutes a disobedience of orders.

2. - I am to say that the Divisional Commander regrets that an officer of Lieut.-Colonel Rosenthal's experience should have been guilty of such indiscretion.