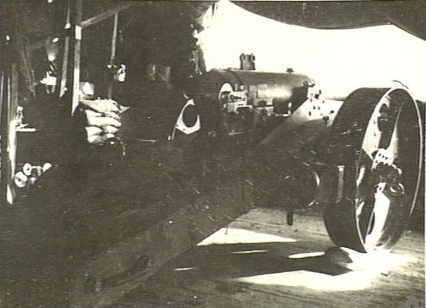 The 4.7 inch Naval gun in its emplacement, which fired the first of its rounds on the
26th July amidst applause from the Infantry (mentioned by Col. Rosenthal below).
[Courtesy of Great War Forum]

A fairly quiet day a little shelling. We are rather resenting the intrusion of foreigners in our Battery.

The 7th is well known as the fatigue Battery etc.

Our detachment & one of the detachments had been mentioned in Divisional Despatches on account of special works done under fire early in May last. Headquarters had requested the names of 3 of the number for some reason & a vote was taken and resulting in Corp Coleman from our Gun & Bomb Macfarlane & Baynes from the other gun being chosen.

Today the 4".7 made its debut amid much cheering from the Infantry. It registered three targets. Burgess got into a heap of of transport, animals, vehicles and personnel at 7150x. Quite unexpected as far as the enemy was concerned. Commencement of further changes. General Legge with a number of officers, NCOs and men, yesterday left for Egypt to take up duty with the new Division. Major Anderson also left for Egypt on Special duty. Harris acting as BM, and Vowles as Staff Captain. Nicholson leaves us for General Staff, 2nd Division. Fairly warm fire opened from Olive Grove during the evening. Our old friend the 6" Howr also fired about 4 rounds, but Burgess silenced him. Col Hobbs told me of his recommendations concerning Honours and rewards. His own promotion to Brigadier General is under weigh and will soon be an accomplished fact. Another man killed today, belonging to 8th Battery also two men wounded. They were on the beach. Had a short roam around today with the aid of a stick. Capt Marks very unwell and sent to Hospital. Capt Dangerfield A.M.C. taking his place. Wrote in to OCDA. concerning work done by Marks, for the information of the A.D.M.S.