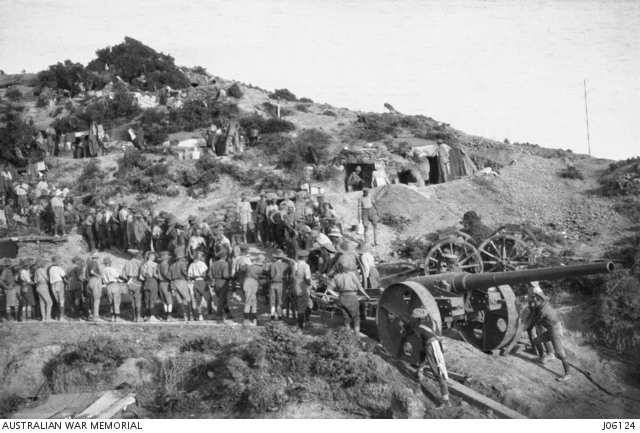 Infantrymen from the 3rd Battalion pitch in to help haul the new 4.7 inch gun over
its final leg passed the dugouts of Victoria Gully, to its permanent emplacement to
the right of the firing line (see Col. Rosenthal's entry below).
[Courtesy of Australian War Memorial - J06124]

Tobacco issue day. Fairly quiet except towards evening when the firing line was very busy as the Turks tried to creep up on our trenches. I was transferred back to my old gun and shifted up. Olly Gunderson visited me.


Battery did not fire.

Enemy opened early with his Artillery. Worked on 4".7 emplacement during the day. Met Col Hobbs at gun during morning. Arranged for 3rd Bde party to move gun at 6.45 PM. Had it in roadway where required at 8.30 PM. Colonel delighted. Thanked the men and got them a rum issue. Letter from Charley, Alvord, Callaghan and A.I. sharp.