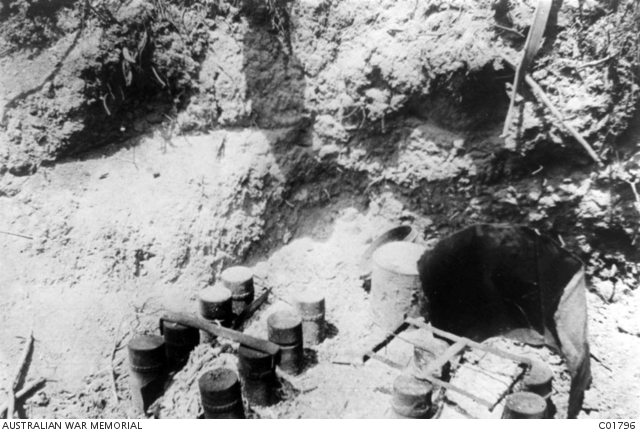 A typical cooking range in the tranches at Gallipoli, July 1915 - this one
constructed from upturned Turkish shell cases.
[Courtesy of Australian War Memorial - C01796]

I cooked some eggs this morning. These are what was secured by Olly on the cheap from one of the men who managed to get them across from Embros Isld. There they are 1/- a dozen but we have to pay 2/6 here. Milk obtained there for 1/- costs from the illicit traders 2/-. The authorities are greatly to blame for not having established a Canteen where these articles could be purchased. Surely it cannot be said that our rations are sufficient – the other day we had tea for breakfast & 10 eggs between 13 men. At dinner rice with a few prunes in it and then cheese & tea for tea. This with biscuits constituted our days rations. The rice & prunes & eggs are a substitute in lieu of jam & bacon which we usually have issued. This goes on day after day etc.

1200 No 1 Gun fired 7 rounds at 2 objectives in communication trench NE of Y JUNCTION suspicious movement was seen there abouts, one man was laying wire out in the open + leading to the trench.  Good effective bursts were obtained.

30th  1730 No 4 Gun fired at a machine gun on contour 400 which was engaging our aircraft.  Good range + fire was obtained at range of 950x which had the effect of silencing the gun.

Provided 8 horse team last night for use of Lowland 4th Battery. Lt Edwards ordered to Cape Helles as Capt 6th Battery. Lt Garling attached to 8th Battery. Howrs did not shoot last night against Echelon Trenches but were to have a series at 8AM today. I waited some time, but no sign of shooting. About an hour later I was advised shoot was postponed. Clerk from 7th Battery reported for duty at D.A. HQrs. Handed over working parties to Major Clougstone for Artillery road, from Shell green to valley between Bolton Hill and Tasmania Post. Electric bulbs for torch received from England, also boots from Callaghan & Son. Sydney. Colonel Hobbs promoted Brigadier General. I extended him my Brigade’s hearty congratulations. Watched Howr shoot at 5 P.M. on Echelon Trenches. Only five rounds fired which did not register target. Waste of ammunition unless a good series authorised.

Discussed situation with Gen MacLagan. Hostile aeroplane overhead about 7 o’clock. Appeared to volplane down to earth East of Gun Ridge. Our aeroplane up at same time, but as she is not armed she discreetly kept out of the way. Miles gave enemy first taste of his long range gun today against Infantry drilling on Kilid Bahr plateau. More reinforcements arrived for Brigade.

Gunner Stanley Carter was severely hit by same shell dying within a few minutes.  His first remark on regaining consciousness "Is the gun alright, Sergt" - part of his back was torn away.

The three of them were blown all ways.

Sergt Taylor:  After the explosion Taylor went on (another detachment jumped in + went on with the firing) Taylor tried to go on firing though wounded.  When helped away he strongly protested that they should attend to the others.  "Look after Lennard + Carter.  They're only They're badly hurt - I'm only scratched.  Taylor had been hit in 14 different parts of his body.

[The below is an extract taken from a letter written home by fellow
8th Battery artilleryman Corporal H. R. McLarty, as published in
The West Australian on the 28th August 1915.]

"This is how the men in this battery die:- When the smoke from the bursting shell had cleared away, Wallis ran up to see the damage. He found Mick Taylor crawling about the ground, covered in blood and dazed. Bill said, ‘Are you badly hit, Mick?’ ‘No, Bill,’ he said ‘I am only scratched; look after Doug and Stan.’ (We subsequently found that he was wounded in 14 places.) Bill Wallis then picked up Doug Lennard. The poor lad had one arm off, one leg shattered at the thigh, and internal wounds. He said: ‘I’m done; look after Mick and Stan; don’t mind me.’…Carter was leaning on the gun. He had a fearful wound in the side. He said: ‘I’m sorry I’m moaning; I know it will upset the others, but I can’t help it; I can’t help it.’ He died, poor lad, almost immediately. His last words were, ‘Did they get the gun?’ Doug was in fearful agony, but kept saying, ‘I’m dying, but, by God, I’ll die game.’ He lingered for two hours and it was a terribly pitiful thing to watch. His last words were, ‘I died at the gun, didn’t I?’ And so he went, dear lad, the most gallant, the most unselfish little soldier God ever made. He has taught us all how to die. Mick may pull through - 14 wounds. God grant it may be so. I do not think in the whole history of this war there is anything to eclipse this incident for gallantry of unselfish devotion to comrades.

The General spoke to us all. He said ‘Dear lads, I have heard of nothing grander than the way your comrades died. I am proud of your battery. I would be proud to be a gunner in your battery. I only hope that when you return you will be appreciated as you should be.

We buried the dear lads side by side at midnight. It was a real soldier’s burial. The minister’s voice was drowned in the crack of bullets whistling overhead. And thus we left them."