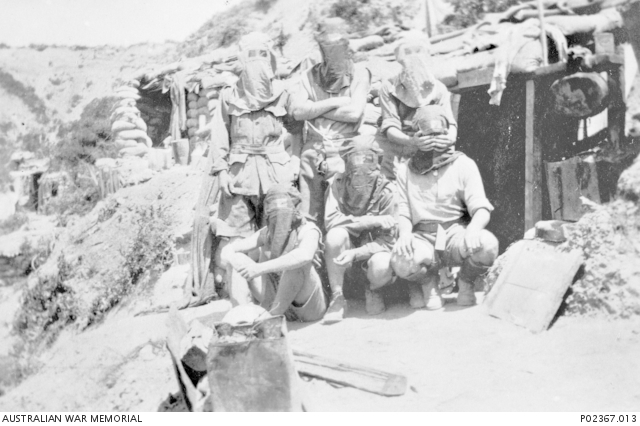 Members of the 1st Australian Divisional Signal Company in July 1915, wearing
some of the first consignment of gas masks delivered to Anzac Cove.
[Courtesy of Australian War Memorial - P02367.013]

To-day I was warned that I would be temporarily transferred to another gun in our Battery now in command of Lieut Hodgens.

An exceedingly quiet day. Emplacement for 4.7" gun commenced and 6" Howitzer moved to a new position on Right Flank. Conference with Col Hobbs and Col Johnstone re use of artillery in case of attack by enemy if using asphixiating gas bombs. Decided to leave matter in hands of Brigade Commanders to act as they think best. A little shelling of shipping late this afternoon. Arranged with Engineers re construction of 4.7" roadway. Received late this evening note from Mr Pengelly, enclosing a letter from father and another from John Halford which had gone to Heliopolis Hospital. Also received letter from Nell dated May 11th, enclosing Alvords and Chris’ letters.