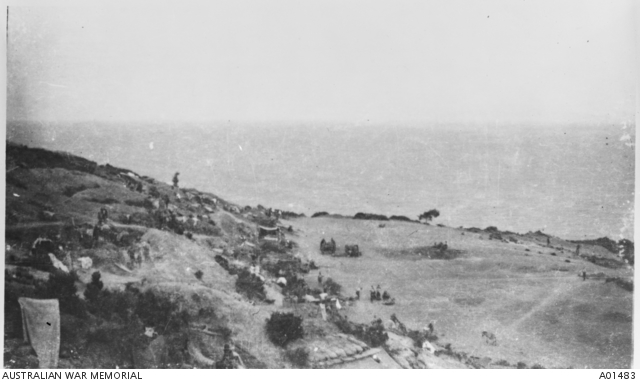 Looking down across Shell Green and the sea from the ridge immediately to the rear
of Tasmania Post, with what appears to be an 18 pound field gun & ammunition limber
visible on the flat almost dead centre - in mid-July 1915, the 7th Battery's guns were
located just out of shot centre left, whilst Col. Rosenthal searched for new, higher
Battery positions around Tasmania Post (mentioned above).
[Courtesy of Australian War Memorial - A01483]

Not too good – no appetite

Mentioned in despatches in connection with work done early in our operations. Myself and a few others of our 7th Battery. Last night there was plenty of rifle fire.

0635 Party of enemy about 200 strong observed in square 212-M-5 apparently this was a working party which had just ceased work + appeared to be collecting tools + forming up preparatory to marching off.  No 3 Gun opened fire firing two rounds which both burst short + the party took cover.