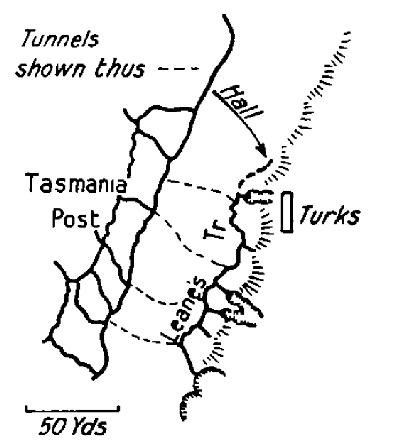 The trench taken by the Australians on the 31 July-1 August, nicknamed Leane's
Trench after Captain Leane who commanded the assault, in relation to Tasmania
Post - sketch of the trench layout as at the start of August 1915.
[Courtesy of Australian Light Horse Studies Centre]

At moon rise (1.15 pm) last night a red flare was burned as a signal for the howitzers to open fire on the enemys trenches, opposite Tasmanian Poast; four minutes after this we were to open out on the zone allotted to us so as to keep the enemy from bringing up reinforcements. The Engineers were to explode five mines under the Turks advanced trenches then the Batallion In. rushed the enemys trenches taking up with them in the first rush three machine guns. Many Turks rushed away leaving their rifles etc. Others were either bayoneted or taken prisoners then our machine guns played havoc among the Turks retreating. A brisk fire was kept up all along our line with rifles, machine guns and bombs to keep the attention of the Turks off this spot. We had not opened out with our guns before the Turks joined in with their artillery and shells, bombs and bullets were fairly raining down, shrapnell was fairly pouring down. The dust and smoke would nearly smouther one. Our chaps captured two of the enemys machine guns and a great amount of ammunition.  The Turks counter attacked ten minutes after they lost their trench, then again about an hours time, but they were easily beaten back. Enemys battries from Olive Grove and Gun Ridge were pasting us. The 9th Battery opened out on them; we kept firing on the enemys trenches.  The howtzers did splendid work. This battle raged from 10 pm Saturday night up till 5 am Sun. morning. A German Taube came over this evening and went over towards lmbros, and in the meantime our aeroplane came over here and was doing some spotting for us. So when the Taube was coming back our chap got up a bit higher and made straight for the Taube and the Old Taube made off for his life. Our losses last night 60 killed, 70 wounded, enemys heavy.

This morning we had a fair idea of the casualties of the engagement and on our side about 20 were killed & 80 wounded. In our own unit we were fortunate and escaped without a loss. How the enemy fared we could not say to any definite extent but their losses must have been considerable. We expected to have a big counter attack this morning but it was a quiet sabbath morn after such an angry night. The screaming of shells and the crack crack of rifle fire made a perfect pandemonium. You could not hear yourself speak.

We had to keep a very careful watch in the evening as we expected our Turkish enemy to attack in reply to the previous evening’s incident. The expected did not happen.

Enemy’s artillery opened a brisk fire at 4.15AM. particularly on trench taken by our Infantry. The 9th and 5" Batteries soon got on to them and eventually silenced them. New work being strengthened. Total casualties in Infantry 75 wounded and 20 killed, while Light Horse lost Col Harris killed. Many dead Turks could be seen in front of trenches, and generally we feel they had a very bad time. Lyddite shook them up. This afternoon How battery registered Southern end of this trench which is still in the hands of the enemy. Another operation will shortly give us the remainder of the trench. Our artillery fire proved most effective and Gen MacLagan tendered us today his best thanks and congratulations as also did General Hobbs. All guns being manned tonight in case of Counter attack.