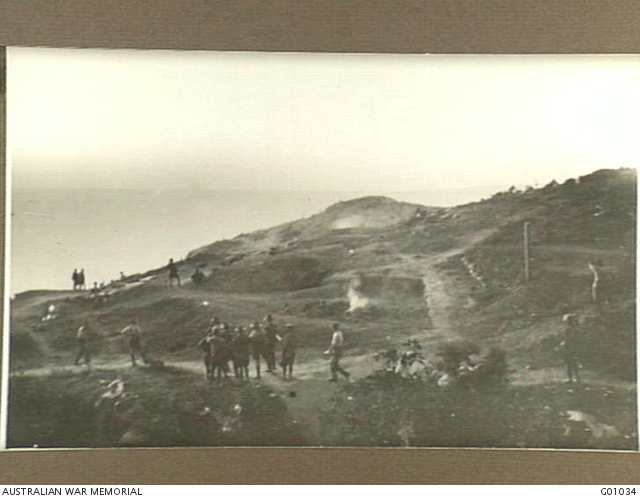 Australians watching the effect of Turkish shellfire in the Dardanelles in July 1915,
similar to scene described by Col. Rosenthal below.
[Courtesy of Australian War Memorial - G01034]

Those who went to Embros Isld returned to-day. Everything was made ready in the morning in case of an attack. It is expected that the attack will be made to celebrate the Turkish Constitution Day which is to-morrow. We set fire to all the bush in front of our lines so as to prevent the Turks creeping up on us.

I was not feeling at all well to-day. We had a change of officers Lieut Garling taking the place of Mjr P.J. Ross.

Lieut J.P. Ross with 2 N.C.O’s + 6 men rejoined Battery on return from rest camp at IMBROS.  Battery did not fire.

Plenty of Howitzer shell falling today. Our new Batteries registering. Enemy’s 5" How again fired a few rounds also some of his field guns but nothing serious. Aeroplane series during afternoon. Aeroplane had about 50 shells and plenty of machine gun fire directed at it, but without doing any damage. New 5" Howr late in evening registered Bastion and works on Pine Ridge. It was expected that attack might develop tonight or tomorrow being Turkish Constitution day, and in consequence all necessary preparations have been made by us, including extra supply of ammunition and Respirators and gas helmets. Rest party returned. Lieut Richards sent to Hospital.