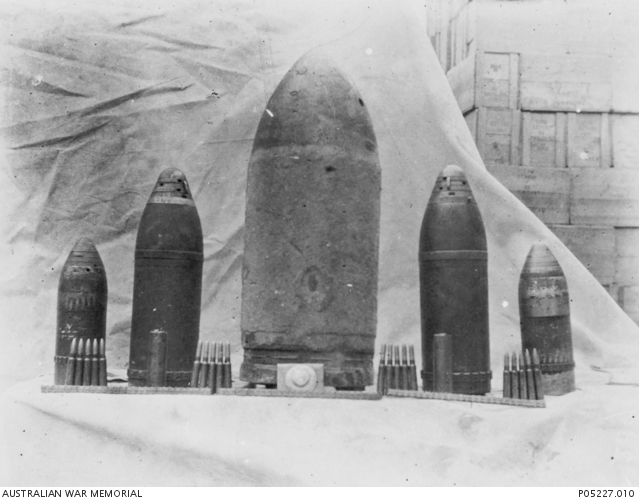 A collection of shells retrieved from Anzac Beach that failed to explode upon hitting the
water. In the centre is an 11 inch shell from the German battle cruiser Goeben, beside which
are two 4.2 inch shells fired from the Turkish gun known as 'Beachy Bill' (a similar shell to
that which struck one of the 7th Battery Guns below), and two smaller 12 pounders.
[Courtesy of Australian War Memorial - P05227.010]

It was a bit damp late last night and still looks like rain this morning.

In connection with recent attack made by us on the Turks I understand one member of the 9th Battalion (Qld) was to be recommended for his bravery in carrying 5 wounded men from near the Turkish trenches back to our firing line under heavy fire.

We were shelled again this morning & lost a fine chap in Gunner Manning. He was speaking to another chap at the time & this man was only wounded in the nose.

Enemy shelled our position killing one man + wounding another.  This gun fires a 4.2̎ projectile.

A fair amount of Artillery fire today. The enemy’s 4" gun from Olive Grove fired several rounds, one of which burst close to Hughes Battery, killing one man and wounding another. Heard from Col Hobbs that we were to get 4.7" guns on this flank. I have been urging this for some time and am pleased to see approval at last given. We shall be able to take on long range guns of enemy. Selected site for them. Howitzers again shooting on "Chessboard". Heavy Artillery fire down South. Activity on the part of enemy manifest on Hill 600 – getting ready for their retreat I expect. Received letter from Nell dated May 16th, with photos of Chris and Shirley, one Daily Telegraph of 8th May, 5 British Australasians from A.T. Sharp, and letter from Edith Halford.

Born on the 29th December 1876 in Hay, New South Wales, Charles Herity Manning was a private secretary, policeman and detective before enlisting on the 21st of November 1914 in Melbourne.

Travelling to the Gallipoli peninsula with the Queensland men of the Battery, Manning was killed on 3 July 1915 whilst talking to fellow artilleryman Bombardier Cyril Leslie Taylor, who also sustained wounds from the fatal shell.  Charles was laid to rest in the south-west corner of Shell Green Cemetery on the same day. 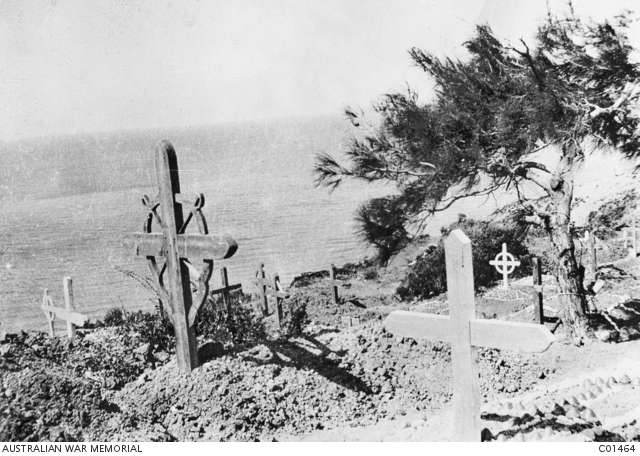