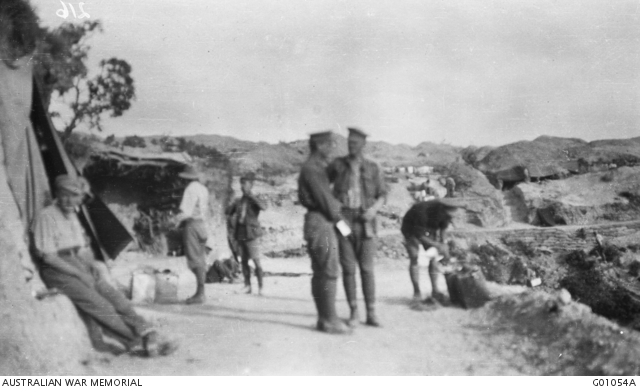 Men resting on 'Artillery Road' c. 30th June 1915, which was cut into the hillside
just behind Bolton's Ridge (where the 7th Battery were located) to facilitate easy
movement of artillery.
[Courtesy of Australian War Memorial - G01054A]

From our trench we could see large numbers of Turks moving from Achi Baba. Matters seem quieter in that direction and it was also somewhat similar with us.

The Prisoners taken and also several who surrendered at various times all speak in the highest terms of the accuracy of our fire and its disastrous effect on their forces.

One of the shells that recently landed in one of our gun pits was a high explosive one made up of small thick pieces with a thin coating of shell over them. On bursting all of the pieces scatter all over the place – a very different effect for our 18 lbder is shrapnel which contains 375 lead bullets and all have a forward direction on the burst. They have used a quantity of 12 & 15 lbder shrapnel shells against us.

I have always understood officers were not entitled to servants once they were in the firing line. I am rather confused to see our officers have set aside a special Day Out where they have an Officers Mess and all their Batmen wait on them – in fact this is all their servants do. They are exempted from all fatigue and other duties and just fetch and carry for their Officers – a thing I can hardly understand when one is fighting. In camp life there was a certain amount of excuse but why officers are provided with a servant by the Authorities when they are paid well is beyond my comprehension.

Some days the weather is splendid here – Not a cloud anywhere to break the beautiful blue and the sun shining with a pleasant warmth. Every now and then there was just a caress from a gentle zephyr out of the sweet South blowing – in fact what one might term it was peerless spring weather. Of course we had some atrocious hot days with millions of flies to add further to the inconvenience of the heat.

Our Howitzers had a series of shots into some trenches of the enemy today and we had our gun and one other trained on to open fire. We did not fire but the enemy shelled us and killed one of our gunners named Driver. He was a fine little chap. About a week ago another of our lads named Bombardier McFarlane was shot by a machine gun. When he left for the Hospital Ship he was not expected to live. I am not sure if I mentioned before about the net-work of trenches [Indecipherable] in front of our gun by the Turks. Everywhere as far as the eye can see loopholes for attacking us can be observed.

At 10PM we fired several shots over into the Turks trenches and then withdrew our gun from the Pit.

All that he had he gave


His joy of life is youth


To Battle for the truth


All that he has - this grave

Star shells were also fired but the object in trying to draw fire was not attained as the impossible and unspeakable Turk did not reply – Young Driver was buried around 11 PM.

Enemy commenced shelling.  One of these shells burst in No 1 Gun Pit killing one man + wounding another.  This shell also damaged the two gun wheels + sight clinometer

Howitzer Battery registered "Chess Board" target in morning, and in evening got into new work on Pine Ridge, followed up by two surprise rounds at 10PM, and two rounds from Hughes Battery.

Long interview with Col Hobbs, Col MacLagan, Col Ryrie and Major Burgess, concerning prematures. Decided that when warning is given men must take cover. Col Hobbs inspected sites I had selected for Howr Batteries and approved same. Enemy’s shell got into Hughes No 1 gun pit this afternoon, killing one man and wounding another. Major Burgess had a man wounded with rifle bullet. Major Hughes very sick. He must get away for a month.

Private Ernest E. Driver, who was killed at the Dardanelles on the 3rd July was for many years a gunner in the Dunedin Navel., and it would appear that the experience which he gained as a member of that company stood him in good stead as a member of a quick firing gun attachment. It happened that when the war broke out Private Driver was in Queensland whither he had gone for a holiday. He made application to the Queensland Defence authorities, and after proving his qualifications was at once accepted for the field battery.Private Driver was one of the first four detachments(four guns) to land at Gaba Tepe. but was some considerable time after the landing before any actual fighting was done. Private Driver was a son of Mr.& Mrs. Driver, contractor. Pine Hill terrace. Dunedin.

As detailed above by Bombadier Sparkes, Gunner Driver was buried in the small Shell Green Cemetery, which had become the resting place for a number of Queenslanders killed on the firing line, at 11pm on the day he'd been hit.  Situated just below the ridge occupied by the 7th Battery's Guns, Ernest was laid to rest in a small Service conducted by Presbyterian Chaplain James Keith Miller, "about 1150 yards South of Anzac Cove." 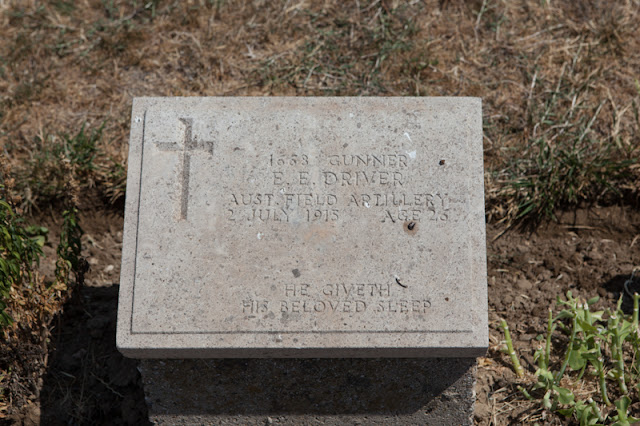