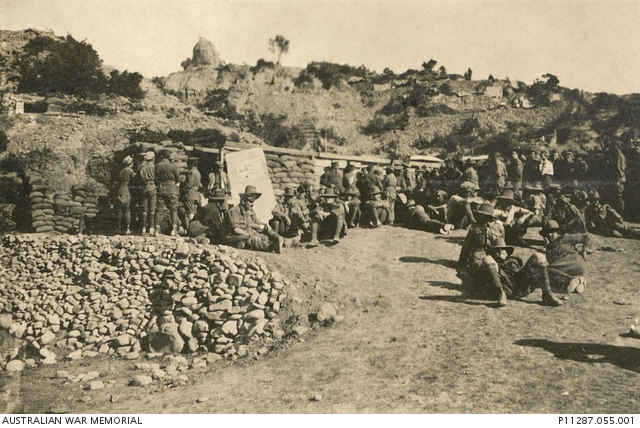 Cans of Nestles Condensed Milk were coveted amongst the Australian troops, &
were an absolute treat when secured.  Aside from buying & bartering cans from
men returning from sick leave in Egypt, the Y.M.C.A. Depot (above) also kept a
small supply - "Sometimes we could buy chocolate and/or dates here. We used to
buy condensed milk (Nestles sweetened) at 2/6 a tin, from some of the Naval
fellows at ANZAC, who had 'appropriated' it from landed stores."
[Courtesy of Australian War Memorial - P11287.055.001]

A quiet day. Bought a tin of Nestles milk today for 2/-. Some of the soldiers bring over packages of goods in their trips and can get anything they ask for them almost. Fancy 2/6 a packet for envelopes.

A pictorial representation showing the action of an 18 pound shrapnel shell, used most
frequently by the Australian Artillery Brigades at Gallipoli.  In deciphering the firing
details mentioned by Captain Crisp below: a Turkish working party was observed
approximately 6200 yards (5670 metres) from N° 1 Gun's position, the angle of inclination
for the Gun was quickly calculated, which in turn provided the "delay time" necessary
to ensure the shell burst in flight, from which the timed fuse at the nose of the projectile
(which worked similar to an egg timer dial) was set at 22 seconds.  At the allotted time
(refer above), the time fuse triggered an ignition down the central tube, detonated the
burster charge, drove the diaphragm forward, jettisoned the fuse & in turn the 374
lead-antimony pellets (similar to musket balls).
[Courtesy of Metal Detecting World]


0700 Considerable activity was observed in the vicinity of the HEADQUARTERS.  Square 224-P-4 + large working parties were seen moving about.  No 1 Gun opened fire at 6200x Fuse 22 + fired 6 rounds at intervals.  The bursts although high seemed to be effective. 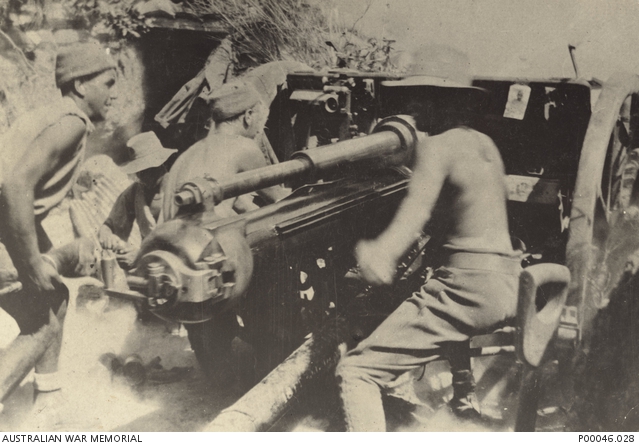 Artillerymen of 9th Battery, with their 18 pound field gun at the extreme point of recoil,
July 1915 - one of the 9th Battery guns had a run-in with a Turkish counterpart (below).
[Courtesy of Australian War Memorial - P00046.028]

Mr Forrest much better and resumed duty. Jopp overhead this morning conducting Aeroplane series with 5th How Battery. Terribly hot day. Burgess had an Artillery duel with the enemy early in the evening. One enemy shell landed in the corner of one of 9th Battery pits slightly wounding one man. Burgess promptly ordered a few rounds of gun fire which soon "shut up" the enemy.

General Birdwood around with General Cox. Inspected 4".7 emplacement. Another 5" How Battery arrived tonight, thus completing Col Hope Johnstone’s Brigade. Two guns of City of Glasgow Battery moved tonight into new position. Two men from BAC and 1 from 9th Battery wounded during day. Small mail arrived. Nothing for me. Big mail for 8th Battery, much to their delight.