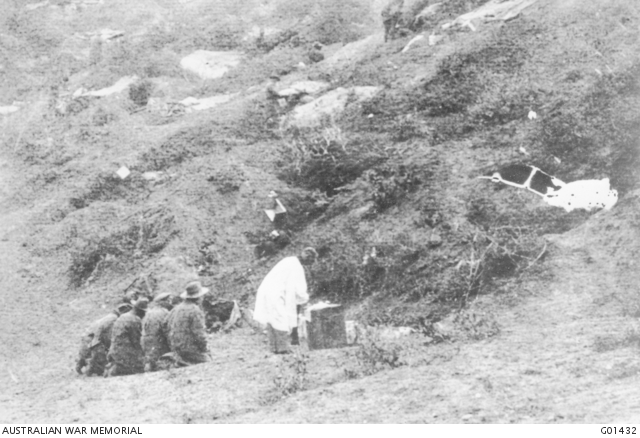 To-day I attended an open air church service at the back of our firing line. The Padre was a Presbyterian Chaplain attached to the 7th Light Horse. He spoke finely and gave an address from the text relating to Esther’s life especially relating to her decision to attempt to save her people by an appeal to the King and when she said “If I perish I perish."

Our major (Gus Hughes) went away to-day for a spell. He had not been well for some weeks and thoroughly deserved a change after the strenuous and responsible work since he landed here. We all think so highly of him.

The Turkish Summer days are now returning and one enjoys a Twilight which we Australians have certainly not been used to in the tropical regions. It makes a long day.

There was a rumour to-day that several transports had been sunk at Cape Helles by submarines. Several Prisoners were captured by a Patrol of our men to-day.

No 4 Gun opened fire on gun pit on PINE RIDGE Square 224 S.7 into which a gun was being run 6 rounds were fired which appeared to be effective.  Major F.A. Hughes was sent to Clearing Hospital sick + Capt A.P. Crisp assumed command of Battery. 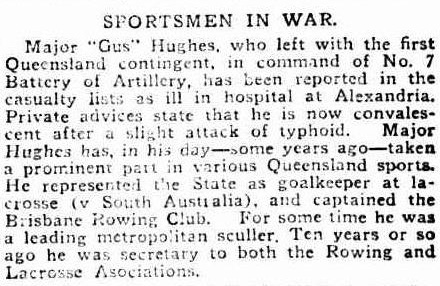 Published in the Referee on the 28th of July 1915, in reference to Major Hughes'
departure from Gallipoli for medical treatment at Alexandria.
[Courtesy of National Library of Australian - Trove]

Very quiet day. Col Hobbs inspected site selected by me for 4.7" gun and approved same. I am to commence work on emplacement on Tuesday morning. The 5" Howr fired a series on No 2 section of Enemy’s front. Had a good rest during afternoon and read papers sent by A.T. Sharp. Interview with Major Brown and Burgess re appointment of officers. Major Hughes left for Hospital ship, very thankful I am that I have good health.