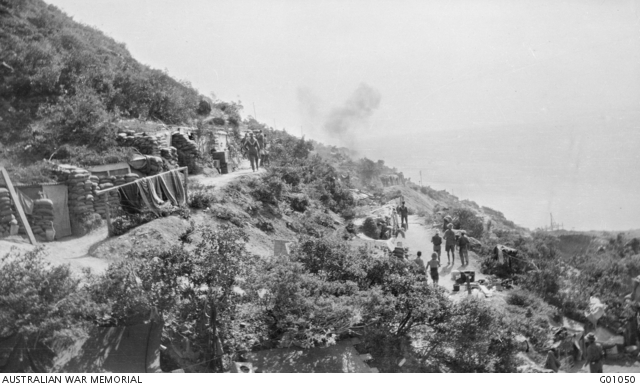 In late July 1915, the Turks placed two French 75mm guns on the Australian left flank.
Above, Turkish shells are bursting over Colonel J. J. T. Hobbs' dugout - the Artillery
Headquarters had to be shifted to a less exposed position, as a result (likely the
circumstance mentioned by Captain C. E. W. Bean, below).
[Courtesy of Australian War Memorial - G01050]

Detailed Fitter Sergt Ellis for duty at heavy battery. Made Price acting Sergt Fitter of 7th Battery. Wrote Nell, father, Charley, Alvord, Chris, A.T. Sharp and J. Halford. Got some seeds today of broom, very beautiful yellow flowers, and very fragrant. I also got some Juniper seeds, and other kinds, the names of which I do not know. Enemy’s Artillery trying to get Burgess’ upper guns this afternoon. They got very close, but did no damage. Another aeroplane series this evening. Jopp will be getting quite an expert on Aeroplane spotting. No further indications of expected attack.

The Turkish gun which fired down the gully about 10 o'clock last night blazed down it again this morning + afternoon.  About dinner time she seemed to be registering - quite like old times - bursting a lot of shrapnel high in the air over the sea + then coming gradually inland until she struck the beach.  Then sweeping up + down the beach very well.  She had started off by firing down the bursting at the top of the ridge, the shrapnel pellets pattering down the gully + on the path outside.  This gun was to the N.E.  Presently another gun - howitzer - to the E started plugging into our gully - one shot just by the cookhouse just missing Q.M.S. Donelley - I saw him rubbing his head after; two or three bursting exactly above the generals and staffs dug outs.  Two guns to the NE also put in a quick salvo down the gully - 15 pdr stuff probably.

Something like a big monitor must be pooping off near Kaba Tepe tonight for there have been some tremendous heart thumps from there.

Our Divl Ammunition Column has been getting itself into trouble in Alex. over its anxiety to get here.  I don't know the details.

Whilst these shells were falling over the cookhouse tonight the batmen + others there were perfectly impassive to it, laughing + running up with the officers dinner - or sitting in bunches in the open - quite unsheltered - discussing it - clustering round Donelley + asking him what happened - though it was morally certain more shells would come - + they did.

The 18 pdr shells are getting very bad.  Something causes the shell to expand in the gun + burst at the muzzle.  These shells are this year's make. (1915).