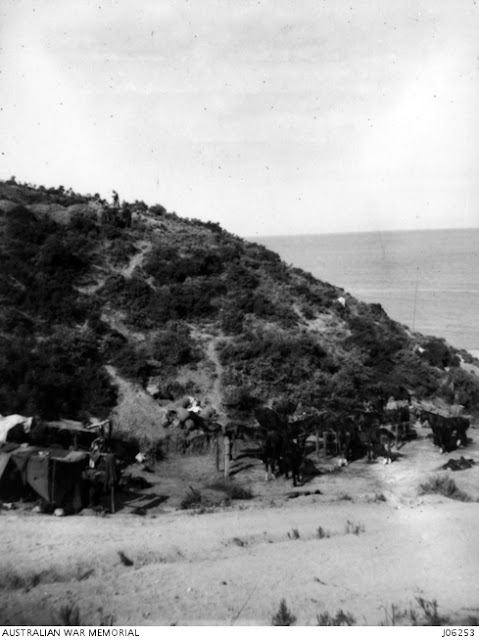 Battery Horses at the edge of Shell Green, late July 1915, with one of the Glasgow
Battery  Howitzers being emplaced on top of the hill in background (mentioned by
Col. Rosenthal below).
[Courtesy of Australian War Memorial - J06253]

Last night the Turks gave us a lot of severe rifle fire. It is a bit cooler to-day. In orders we heard that the enemy intended to make a big attack shortly.

Have had to spend a quiet day in bed. Col Hope Johnston called to see me during the morning and this afternoon Col Hobbs brought Col Shepherd of City of Glasgow Lowland How Brigade.

We shall have plenty of Howitzers in action very soon. Arranged to commence tunnelling through Bolton Hill. Sent cable to Nell which will probably not leave Alexandria for a week. Aeroplane series again this afternoon. Head Quarters beds have commandeered a black donkey to carry their water each day. One of the two that have been roaming about since we landed was killed by shrapnel yesterday. 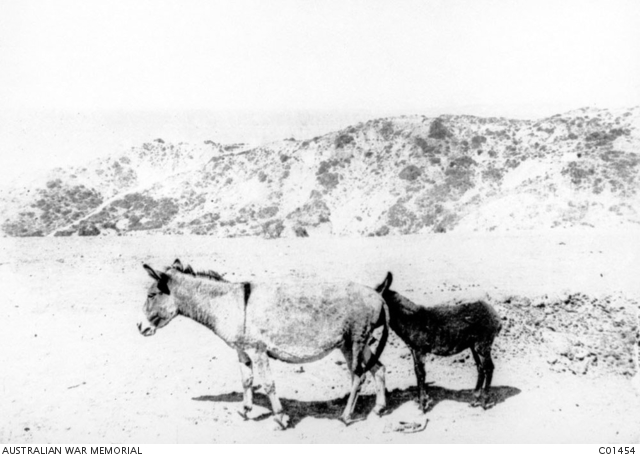 The mother donkey (pictured), along with her mate, was at Anzac Cove when the troops
landed there. She survived being twice wounded and remained throughout the campaign;
her mate was wounded several times and subsequently killed. The young donkey, offspring
of the two, was born at Shell Green and taken to Egypt when the troops were evacuated.
These may very well be the donkeys referred to by Col. Rosenthal, above.
[Courtesy of Australian War Memorial - C01454]