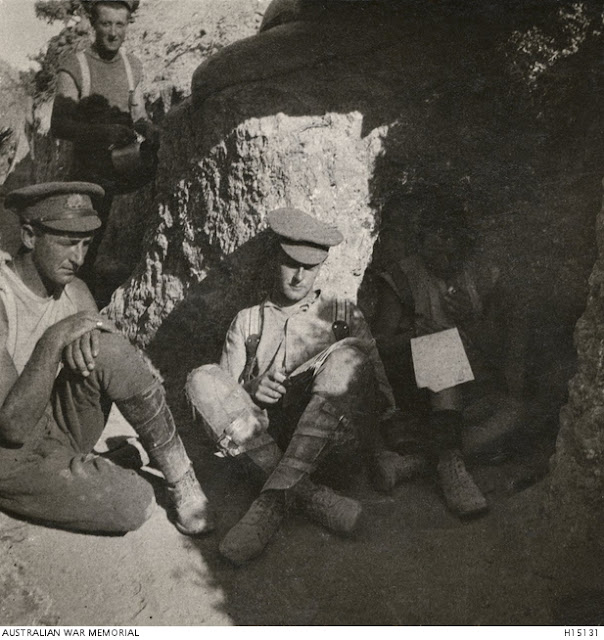 Yesterday afternoon the enemy gave us taste of big shell fire. Things were a bit lively for some time but fortunately little damage was done. I went for a swim late in the evening. The nights are lovely and moonlight just now. A beautiful full moon. I was on watch late last night and left alone with my thoughts broken only by the crack of a rifle here and there or the staccato stutter of a machine gun. I looked back for all that had passed since I participated in this great warfare. One could not help feeling sad as one dwelt on the loss of so many fine lads as I had seen removed from our ranks on all sides. This present waiting game of ours has very little glory in it and we all feel impatient to attack the unspeakable Turks or be attacked by them. Our existence here is getting indescribably dreary.

I think I have mentioned before that from the beach up (Anzac Cove) there are huge ridges covered with undergrowth and small shrubs. Just now the lingering touch of Summer has removed all signs of the many wild flowers which months ago were intertwined amongst the greenery. From the ridge where our trenches are you look out on to country of somewhat similar formation and beyond that there is that piece of landscape and then a huge hill acts as the horizon of our zone. To the right stretches Achi Baba and the Gaba Tepe outlook. In between the flats are covered with long grass on which goats and cattle can be noticed grazing. In places there are patches of trees and one long grove known as the “Olive Grove" which occasions us a great deal of trouble as it provides a good hiding ground for guns.

I do not think I mentioned that while digging outside our gun pit in view of the enemy’s position the other evening we disturbed the remains of some poor unfortunate Turk or one of our own Boys. This gave us Horror after Horror.

Early this morning Lieut. Thorn was killed while in charge of the machine gun of the 7th Light Horse.

This evening I went over to headquarters and saw Major Griffith and had a chat. He with almost all others are suffering the effects of Diarhea pains etc. Saw Olly G at Engineers Stores & arranged to secure eggs, milk etc On the way back I had a good swim. The moon was lovely. It was at the full and the strong light had robbed even the planets of their lustre. The smaller stars were not visible at all & the sky formed of its dark color, curved overhead, pearly hued and luminous.

0700 Another working party seen working in sq 211.Z.8 and were engaged by No 1 Gun who fired 3 rounds with good effect causing all work to cease.

1810 Owing to our position being shelled somewhat heavily with all size shells It was thought advisable to put a few rounds into likely observation stations.  No 1 Gun fired 4 rounds at the station on GABA TEPE and No 3 at a station near CEMENT EMPLACEMENTS fired 4 rounds.  The shelling seemed to die down soon after these rounds were fired.

According to the Greek Consul at Constantinople the Turks were expected to attack us on or before this date. The day has however passed and excepting for the usual shelling there has been nothing special to note. The Anafarta gun made things rather warmer at A.C.H Qrs and in consequence our Aus Div HQrs had to move to a more sheltered spot.

Had a long letter from Jopp giving particulars of his Aerial reconnaissance. Col Hobbs phoned me his recommendations concerning officers for meritorious Services. I find my own name is included. Mountain battery during night shelled works in front of Tasmania Post.