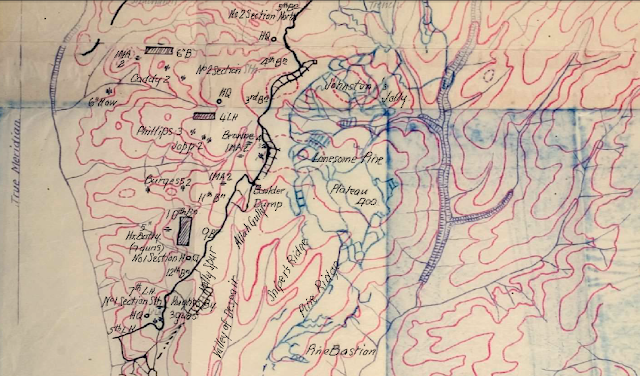 A map of the various Unit positions along the firing line at Gallipoli, including Turkish
positions, added as an addendum in Captain C. E. W. Bean's diary as at the 3rd of July
1915 - various positions have been manually traced for clarity, showing some of the 7th
Battery's targets on 8th of July (Pine Ridge Bastion & Sniper's Ridge), as well as the 7th
Battery positions (Hughes By 3 guns) in the lower left corner fronting the 7th & 5th Light
Horse Regiments & No. 1 Section South HQ.  Please click on the above image for a larger,
more legible version.
[Courtesy of Australian War Memorial - Records of C E W Bean, Official Historian]

I was on duty between 2am -3am this morning. Very lonely and plenty of bullets coming over and on our gun pit. At noon we opened fire on the enemy on to some gun pits. It some demoralised them and they did not return much fire. At 6 PM we were again to open fire but the enemy anticipated us and we had to withdraw our gun. We are now playing the enemy at his own game as he treated us when they had guns at Gaba Tepe

0900 All ranks instructed in use and putting on of Respirators.  In order to prevent reinforcements being sent to ACHI BABI from ANZAC a holding attack was ordered to begin at 1100 which lasted till about 1200.

1100 No 1 Gun engaged GABA TEPE observing station firing 4 rounds at 2425x.  4 rounds were also put into TWIN TRENCHES at 1525x with effect and 4 rounds at a trench in square 202-0-1 in which appeared considerable movement.

No 2 Gun engaged the PINE RIDGE BASTIN at ranges of 600 to 800 yards and partially destroyed portions of this work after firing eleven rounds.

No 3 Gun engaged the CEMENT EMPLACEMENT + what appeared to be an observing station about 20 yards to the WEST of it at a range of 2150x.  12 rounds were fired by this gun.

No 4 Gun engaged SNIPERS RIDGE and fired 8 rounds at ranges from 650 to 850 yards all of which appeared to be effective.

1800 In pursuance of orders for a general bombardment of the enemy’s positions No 1 Gun engaged the observing station on GABA TEPE firing 4 rounds at range of 2400 yards all of which appeared effective.  Four rounds were then fired at TWIN TRENCHES at a range of 1550x which were effective.

Immediately our guns opened fire the enemy’s guns from GUN RIDGE brought an effective fire on Nos 2 + 3 guns consequently these guns were withdrawn & did not fire.

No 4 Gun was put temporarily out of action by one of the enemy’s shells knocking the parapet down onto the gun consequent the gun did not open fire.

Around all stations with Col Hobbs. Gen Legge met us at 4"7 emplacement. Matter of drugs brought before the General. The 5 How. Battery bombarded "Johnstone's Jolly" during the evening, many shell failing to detonate. N.Z. Howr shelled ‘Lone Pine", and my batteries were active over the whole front. A good deal of fire drawn from enemy’s guns. About 50 reinforcements of sorts arrived today and were posted to the B.A.C. temporarily. Some wounded and sick men also returned to duty.

[On the 8th July, Col. Rosenthal responded to the correspondence he'd received from
Lieut.-Col Cyril Brudenell Bingham White, Chief of Staff, on the previous day - this
was in reprimand for indirectly allowing publication of a private letter written to a
friend in London, whilst recuperating in Heliopolis Hospital in mid May, mentioned
here on the14th May.  Below is a transcript of Col. Rosenthal's response, tainted with
veiled sarcasm, taken directly from Col. Rosenthal's Service Dossier held by the
National Archives of Aus.]

I beg to express my regret that contents of a letter sent from Heliopolis Hospital Cairo, to a friend in London who occupies a prominent Government position should have been handed to the Press without my consent, and without my knowledge, particularly as I have been most careful and guarded in my communications.

I realise that under the Regulations I am responsible for what others may do with my letters, but I would herein beg to draw your attention to the following facts:

Long before my letter reached England full accounts of all casualties sustained at the Dardanelles together with detailed accounts of the operation here were published in all the London papers, and I therefore concluded that what was public property, might be referred to by me without contravening either the letter or spirit of the Regulations.

I shall take care that such a position shall not occur again.