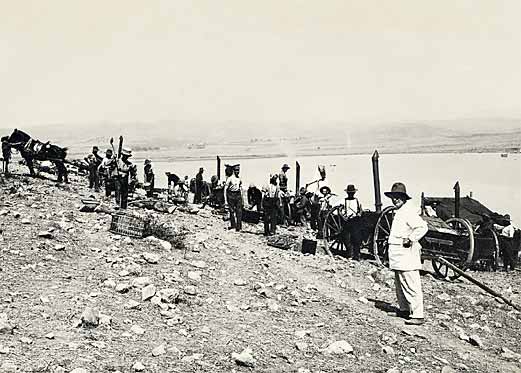 Mobile Field Kitchens arriving on Lemnos Island - the envy of every A.I.F. Brigade
on the nearby Gallipoli peninsula.
[Courtesy of Gallipoli and the Anzacs]

Fresh meat for breakfast. How delightful it was and what a break in the monotony of our daily fare. I noticed that the Light Horse Brigades were getting Travelling Kitchens from funds collected in Brisbane and I thought that we should have one for our 7th Battery – and wrote home to that effect.

Each day to fill in moments when not reading or shelling the unspeakable Turks there were many odd jobs we did such as [illegible] etc. We always kept ourselves shaved even while bullets or shells played merrily over the dug outs and trenches. We got an issue of English War notes to-day. Small pieces of paper which hardly looked genuine. 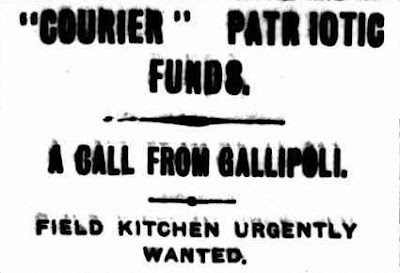 "An urgent call comes from Gallipoli. It emanates from Bombardier W. P. Sparkes, of the 7th Battery, Field Artillery, 3rd Brigade, who, writing under date July 17, voices the need of that large body of men who have been in the firing line, adding lustre to the nation's martial exploits since the memorable landing at Gallipoli about which General Sir lan Hamilton wrote in his despatches, "It is my firm conviction that no finer feat of arms has ever been achieved by the British soldier - or any other soldier - than the storming of these trenches from open boats on the morning of 25th April." These gallant men felt the need of a field kitchen, so they commissioned Bombardier Sparkes to solicit the good offices of the "Courier" readers in securing one for them. As he himself puts it, - "One of these kitchens, a number of which 'Courier' subscribers have already sent over here, will go a long way to break the dreadful monotony of our daily fare." Bombardier Sparkes will be remembered as one of the most generous sports in Brisbane. He was for many years secretary of the Dingey Club, and we would specially ask that large circle with which he was so prominently identified to come to the help of Bombardier Sparkes and his brave comrades who are doing so much for the Empire as well as for the good name of Australia. These travelling kitchens have amply proved their utility in the present war, and with the near approach of the winter campaign they will be specially acceptable were the necessary amount forthcoming in a week's time our boys would be in possession of their kitchen in a month. Will somebody start the ball rolling?"


Bombardier Sparke's letter home in search of funding for a field kitchen would finally be
published, exactly 2 months later, in the Brisbane Courier on the 17th September 1915.
[Courtesy of National Library of Australia - Trove]

0945 Enemy observed drawing water from stream or well about 20 yards North of Y JUNCTION. No 1 Gun fired two rounds which appeared to be effective.

Enemy’s Artillery from "Olive Grove" opened fire early along the beach. Later the Monitor shelled the position. Roof of 4".7 emplacement being erected. Colonel Hope Johnstone and one of his majors (of 5" How Bde) went through maps of position at my Headquarters. Offered them and Major Miles use of our erected telephone poles. Col Hobbs took Col Johnstone to 8th battery observing station. Most of our Artillery fire today directed against "Wine Glass" and "Olive Grove" batteries. 5" How turned on to "Turk’s Hump" and "Johnstone's Jolly". Balance of 1st How Bty of Col Hope Johnstone’s Brigade brought to valley beside 3rd B.A.C. 2nd Battery also arrived and moved to right flank. Capt Jopp left for Aerodrome at Tenedos. Mr Forrest ill.