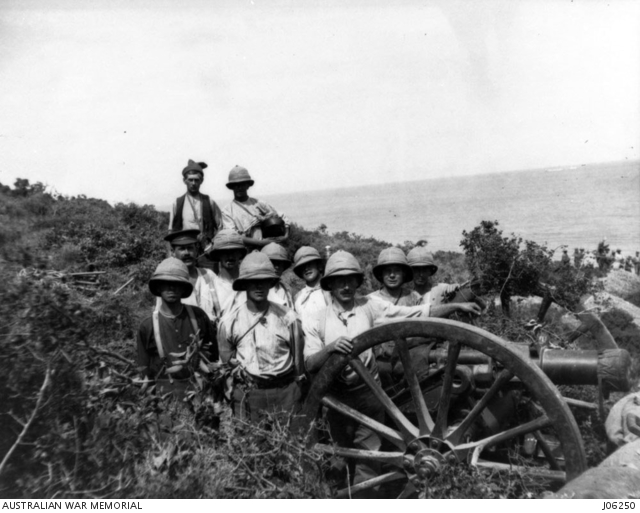 One of the 5-inch Howitzers located along the edge of Shell Green behind the
7th Battery's positions, mentioned by Col. Rosenthal below.
[Courtesy of Australian War Memorial - G01034]

Felt a bit better to-day but still not up to the usual. We had to keep a good look out yet as attack still expected. It was quiet all day. Turks fired a few shells in the evening late for the first time.


No attack developed during the night. Our Howitzers have kept up a slow rate of fire during the night, dropping shells into various valleys where the enemy is known to Bivouac. The detonation of these 50lb Lyddite shell at irregular points and intervals must have a very demoralising effect of Turkish troops. It is rumoured they are being, or have been reinforced by 100,000 men of sorts and a supply of shell. I think our fellows are quite equal to the task of wiping them out. Howitzers doing further registration. Col Hobbs called at my Headquarters. Told me many changes would be made during coming week. Interviewed Major Clougston re roadway through or over Bolton Hill. He is to report best scheme to me. Attack expected tonight. Received two letters from Alvord, one from Chris, one from A.T. Sharp, one from Charley and one from R.I.B.A. Two more casualties in B.A.C. today.