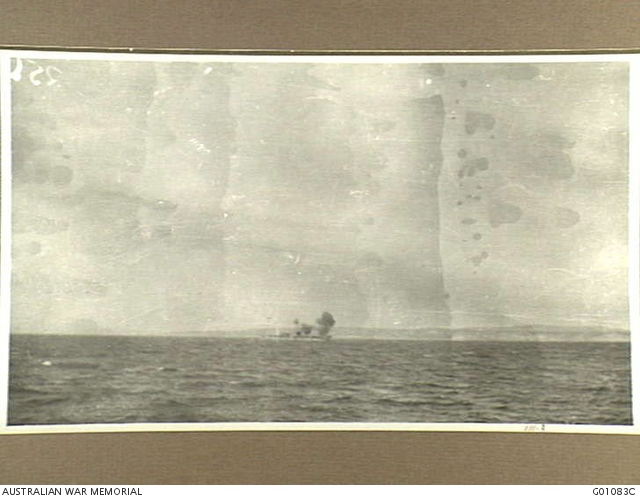 Three of the first shots ever fired by this class of monitor, the H.M.S. Abercrombie,
from Erenkeui Bay on the southern side of Dardanelles, across the Gallipoli Peninsula
on the 12th July 1915.
[Courtesy of Australian War Memorial - G0103C]

We bombarded the enemy’s position this morning early and in return received a lot of shelling. Several Light-Horse men were killed.

0630 In pursuance with instructions for a holding attack No 1 Gun opened fire on a working party in square 211-X-  Four rounds were fired at 4600x with effective bursts.

0815 No 1 Gun engaged the TWIN TRENCHES.  Five rounds were fired with effect.  One round was fired at the observation station on GABA TEPE.  This gun then fired 5 rounds on enemy’s trenches in square 212-Q-4 in which considerable movement was seen.  All rounds appeared effective.

No 2 Gun engaged the PINE RIDGE BASTIN at various points at ranges from 800 to 1000 yards with effective bursts.

No 3 Gun engaged enemy’s gun which opened fire from a position under cover 75 yards to the EAST of the CEMENT EMPLACEMENT.  5 rounds were fired when the enemy brought effective fire to bear on this Gun + it was withdrawn temporarily.

0845 No 3 Gun then fired 5 rounds into ECHELON TRENCHES with effect destroying portion of them.

0900 On receiving from 2nd L.H. Bgde information that reinforcements were moving up the Gully in to the EAST of ECHELON TRENCHES No 3 Gun fired 7 rounds into this gully but the effect could not be observed although the bursts appeared effective.

At 4.30 AM we commenced Howitzer bombardment of enemy’s position preparatory to a demonstration here, in order to hold enemy to his ground and prevent him reinforcing South where our troops were to make an attack today on part of the line. At 8.15 all our Artillery opened fire, and our Infantry tried all sorts of dodges to induce the enemy to man his trenches. Immediately he did our fellows attacked with bombs. Two men of the Brigade wounded. Lt MacAdam transferred to 8th Battery, Lt Garling transferred to 3rd B.A.C. 4".7 moved a little further over very steep gradient. A demonstration tonight in front of N.Z. & A division. Very heavy bombardment of Achi Baba by navy during the day. It was a magnificent sight. Our forces in the South made a substantial advance. General Birdwood visited my Headquarters.