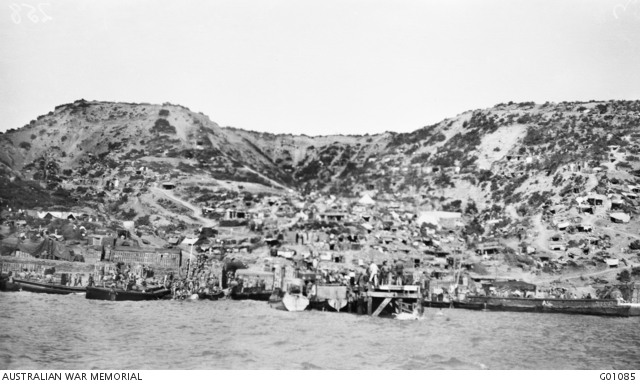 This morning our aeroplane while making a reconnaissance was subjected to a fusilade of shell.

Last night the news came that the Turks were moving Nor’ East and very likely could come over to attack us. What was expected though did not occur. It was a rather anxious on watch and my time fell at 3am in the morning.

In orders today it was specially mentioned about the great work done by the 29th Division assisted by our Aus and NZ Forces. Mention was also made of an attack made by the Turks on our left Flank on Wednesday evening and the heavy losses we had inflicted on them. Some prisoners captured on this occasion stated the Enver Pasha was in their trenches on the night of the attack and had given them orders to advance as they were assisted by several new battalions. After this attack hundreds of their dead could be seen laying off our trenches.

Enemy’s troops observed moving South West in the direction of KRITHIA through approximately Squares 185 S+T.  Two columns of Infantry were seen each consisting of about 600 men followed by a party of mounted men.  At intervals during the day small bodies of troops amounting to about 500 men in all were seen in the same place + moving in the same direction.  War diary up to 30/6/15 sent to A.A.G. 3rd Echelon.

After all a very quiet night. A 4" gun opened on us today but luckily did no damage. Have been unable to locate it up to the present time. As soon as we do the 5" How shall have a "go" at him. No further Howitzer registration today, Major Stewart being ill.

Gen Owen and myself accepted apology. Col Hobbs confidentially informed me that more Howitzers would soon be here, and asked me to look out suitable positions for two Batteries. This I have done. How battery still on their work for digging in. Men are very slow. Wrote to Robert re taking over Australian 5" Hows and to chief Inspector Woolwich Arsenal, recommending alteration in No 3 Director to admit of vertical angles of 45° being read. War Diary forwarded to Base.