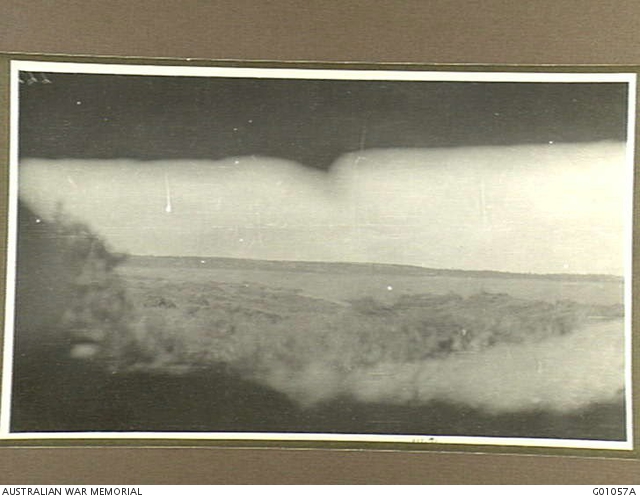 Last night it was very windy dusty & rain threatened and the Turks took advantage to make a small attack. I think what chivied them up was the fact that we had sent out several patrol parties to bring in the dead comrades who fell in the attack made on Monday last.

To-day was quiet and in the evening we had a thunderstorm accompanied by heavy rain. This is the first storm I have experienced since leaving Qld in Sept last and it brought back memories as you can understand. Most of us sat up wrapped in oil sheets while the storm lasted.

Quiet.  Battery did not fire.

Early this morning I went out with Major Stewart to register further targets. Aeroplane Series from Major Burgess’ Battery against Olive Grove at 7.30 AM, afterwards series with Major Browne and Caddy. Major Miles accompanied the Pilot as observer. He had one shot fired at him. Located 2 new batteries behind Achi Baba ridge firing South and reported them. Received message from 8th Division thanking for the information which they stated was very valuable. Unpleasant remarks with Mountain Battery concerning operations on June 28th. Major Burgess had another premature, making twelve in all out of 2600 rounds. Two 5" Howrs set in emplacements. Lines of fire for night work laid out on "Johnstone's Jolly" and "Lone Pine". Heavy thunderstorm tonight and heavy rifle fire. As large columns of dust were seen during the day north of Achi Baba I thought enemy might be preparing a special attack against us and therefore ordered the Artillery of my section to be in readiness. Lt Glendinning reported from Alexandria. 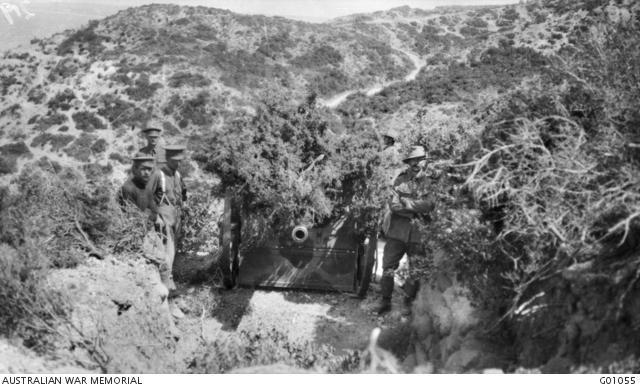 A gun of Burgess' Battery which fired on Gaba Tepe and Olive Grove, covered
with bushes as a screen from aeroplanes - as mentioned by Col. Rosenthal above,
& photographed by Captain C. E. W. Bean c. 30th June 1915.
[Courtesy of Australian War Memorial - G01055]