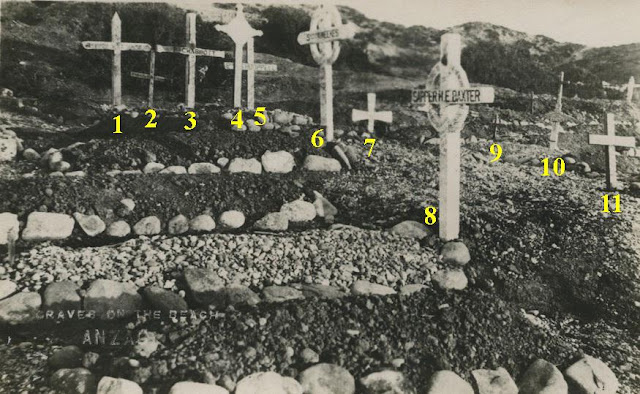 I was first on the landing stage and alone I met Major Griffith. I went along the beach looking at the old familiar spots & what memories it arose. The graves of some of our [illegible] heroes now had crosses showing who laid beneath the inscriptions. I had with me 2 8th Battery Drivers who had come over without authority. Our guns were just in the same positions I was told – no advance and shrapnel was as much in evidence as before.

I got a lot of information from Wm Hurst the first one of our Sub Lieut.

I see Turks had given themselves up today arranged for an armistice had given themselves up in our trenches & they were treated well to counteract any impression that they were supposed to have re getting badly used by our troops when their men were captured. It was done so as to allow them to be able to deny this on returning to their trenches & to enable them to return they were sent to gather firewood with the idea of allowing them to stray back. You can imagine our dismay when they came in with a large bundle of wood in preference to going back to their trenches.

I was pleased to greet old Pals – talk of the doings of the past few weeks. It was indeed a pleasure. I saw Olly Gunderson. Our section gun which was knocked out when I was wounded had been repaired etc.

I found the flies very bad & heat unbearable. Something I did not expect here. There was a great dampness everywhere & our position was getting a vast amount of earthworks on all sides. Some chocolates books & cigars I brought over were greatly appreciated by our own gun section. Hills all defaced of the lovely green hedges.

A very heavy trying day – the worst we have had since landing in Gallipoli. Spent the morning writing Nell and the three boys. Bligh went to Imbros yesterday to get me a few things from the "Cardiganshire" including some interesting photographs and should return today.

An artist, Murray Jones, who is attached to General Birdwood’s staff called this afternoon to see Benson’s sketches. I introduced Benson and sent them off together. General Birdwood and Staff called here about 3.30PM, had a talk about the situation generally and then went on to see Col Ryrie, who is taking over the extreme right flank.

The General expressed appreciation of sketches which happened to be on my table. From all accounts I gather my Brigade Headquarters are the most up to date in our Army Corps. Every body who calls here congratulates me on the design, but then, I am an architect, and even if our Headquarters are "dug out" in the side of a hill, there can still be some semblance of order about their construction. I heard today that we are at last to have some high explosive ammunition for our 18 prs. This will give friend Turk something of a shock. General Sir Ian Hamilton is to inspect this position at an early date.

Up till now his personal attentions have been directed to Cape Helles end.

Col Hobbs, Major Hughes, Capt Rogers and myself out of sorts today. Possibly something wrong with our water Supply.