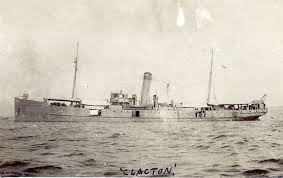 The minesweeper Clacton, a requisitioned & converted British pleasure steamship, was used
to ferry troops between Gallipoli & Lemnos as per Bombadier Sparkes' diary entry below.
[Courtesy of Wrecksite]

Mustupha is a place of much concern
as all wounded soldiers to their sorrow soon learn.
A few weeks there and back your turn
to where the bullets fly and make you squirm.


Scotty and I met in this place of renown.
It wasn’t all comfort or feather down.
We were there a few weeks on bread and jam
and good hot tea that made you very down.


Now we are off where the bullets fly
and hope to meet again in the Street bye and bye.


We were all day waiting on board and as you can understand tired and impatient at the delay. At that the SS Prince Abbas came alongside our craft and we were ordered to be ready at 5PM. A number of cases were ordered to go ashore for further medical attention. One of the disgraceful incidents in connection with the Convalescent hospital. Men being returned to the front before ready or in a state of not being fit for further Service. I discussed [illegible] Service Corp with a Q-M on board. I regretted I had not written home about no comforts reaching us at the front etc.

The SS Clacton also came alongside & I found she was our ship. The Prince Abbas taking some Imperial men back to their units at Gallipoli to be transferred on the Trawler Clacton at 5PM & then called at the “SS Aragon" after which we started on our journey to Gaba Tepe. It was delightfully cool & Lemnos Island now an Island of tents of Prisoners, Hospital & soon faded to the view. I tried to sleep a little bit as we passed Cape Hellies the booming of the guns woke me and it was not long before the anchor was overboard at Gaba Tepe. The Pontoon came alongside and we loaded up and were once more under a rain of bullets although it was only about 3am.

Major Browne went with a party for a "Joy Ride" down the coast in a Destroyer while Major Hughes, Richards and myself walked around the New Zealand position. The Country around Suvla Bay and Anafarta looks very fine. Would make ideal Golf links. Plenty of nice shady olive trees, and fields scarlet with poppies. The left flank position is a very difficult one. On the way back a few of the enemy’s shell followed us up, all at a safe distance excepting one, which burst over our head and spattered the beach with bullets about 50x in front of us. During the afternoon a 6" How from the vicinity of Hill 971 lodged 100 lb shells down the valley close to my position. Many were "blind" and I think those which did explode did no damage.

For about half an hour at 5 o’clock quite a number of enemy’s shell of all sizes arrived from all directions. Very quiet night. Heard today that although 150 bags of mails had arrived no artillery mails were included.


What has happened to Postal Staff. 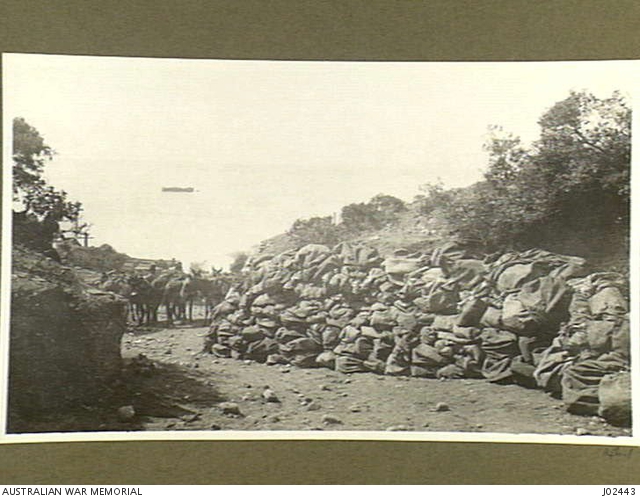 Australian, New Zealnd, English & Indian inwards mail, in a multitude of sacks,
at Anzac awaiting distribution & transportation by mules to the various Units
across the Gallipoli peninsula.
[Courtesy of Australian War Memorial - J02443]