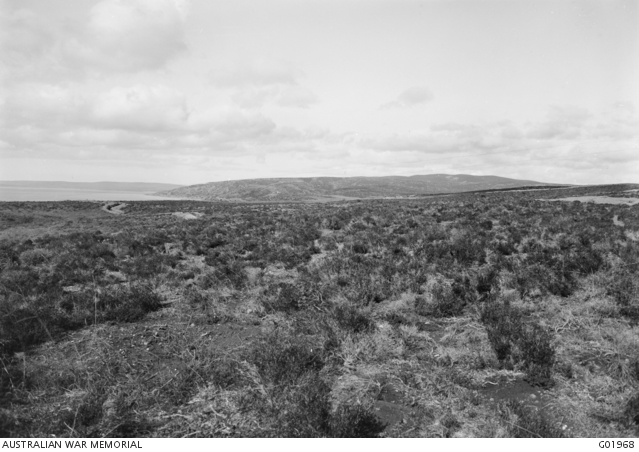 The trajectory from the Turkish-held artillery positions on Gun Ridge, towards
Bolton's Ridge (centre) where the 7th Battery were dug in amongst the
Infantry firing line, & Anzac Cove (centre left).  This is one of a series of
photographs taken on the Gallipoli Peninsula under the direction of
Captain C. E. W. Bean of the Australian Historical Mission, during the
months of February and March, 1919.
[Courtesy of Australian War Memorial - G01968]

Occasional shelling of beach by Olive Grove guns + also 2 guns on Gun Ridge shelled our lines in the vicinity of Brownes Battery.  The Navy shelled the vicinity of these guns 4 hours after guns had ceased firing.  In the afternoon about 7pm we shelled a convoy moving in the direction of Kapa Tepe.


Enemy’s artillery fairly active, but little effect obtained. Our fellows are splendidly dug in. Conferred with Col Hobbs at Brown’s Battery re co-ordination of fire of 3rd F.A. Bde with Artillery of Second Section. Arranged to carry out an experimental shoot at 4 PM but had to postpone it because of necessary alterations to bring effective fire to bear over the area required. Gun emplacement altered during the night. Heavy rifle and bomb fusillade all the evening till about midnight. New Head Quarters so far completed as to admit of our occupying them, and slept there for the first time.