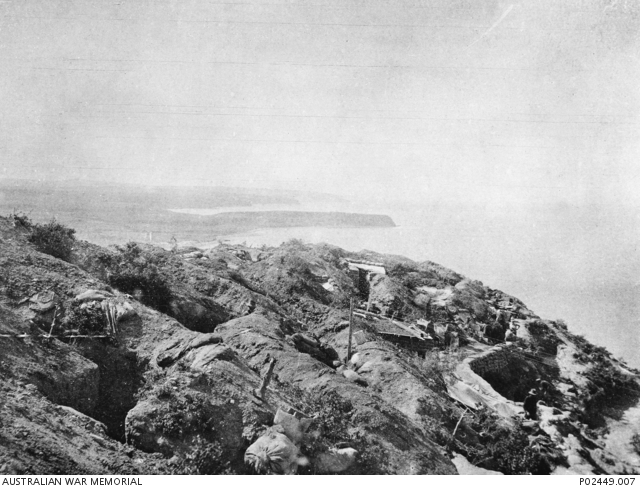 Elevated view looking south from the Bolton's Ridge area over the trenches to the water
of Brighton Beach towards Gaba Tepe, in June 1915. The location is probably Chatham's
Post or Bolton's Hill at the southern end & the right flank of the defences - note the depth
of the trenches, the tunnels & the soldier at bottom right walking amongst the dugouts.
This was the 'world' to which Bombadier Sparkes returned after recuperating from
wounds at Alexandria (below).
[Courtesy of Australian War Memorial - P02449.007]

A newspaper called Peninsular Press is now printed every day at our Base and a copy sent to each unit. At our gun the Officer reads out the news printed on the large leaflet. It contains most of the up to date military news from all quarters of the front. Yesterday it was a sort of visiting day for me for I took back cigars chocolates etc which I distributed amongst our boys. I also saw Cyril Woods – Olly Gunderson & ohs. To-day I started work but altogether I was disappointed to find that things were very quiet. Roads had been made. Larger dugouts etc and our front was just like a Township. This waiting for me is certainly very trying. The heat and flies are very bad in comparison with when I left. Our engineers and Infantry had done a lot of sapping and making a fresh line of trenches in front etc.

Went for swim on beach. Had to go in from Battery on swimming [illegible]. There is a sniper doing a lot of damage along the beach. As we left our gully for the only portion we are now allowed to swim in one poor chap was shot just a few yards in front of me. Enjoyed swim and returned once more to gun pit. Our Battery does not get relieved as promised.

We have speaking tubes from one gun to another & a canteen abt to be opened I understand on the beach. This afternoon we had a detachment of men from the Am Column to instruct and the Sergt Major & I took the instructing of them. It seems strange to be instructing gunners right on the firing line. A big bombardment took place this afternoon on to the Gaba Tepe look out. All day long there was a big bombardment over Achi bar near where the Imperial Division & French were operating & the guns beyond & boomed all day. I hoped while in Alexandria no mention was made of our artillery in the operations at Gaba Tepe. The absence of reading matter is greatly felt by us now we have not so much to do while in the gun post. The object of our gun is now await special developments & guard the infantry in case of a night attack.

During last night a terrific fusillade lasted for some time rather as a prearranged scheme to draw enemy’s fire. We hear that last night the French at Helles after expending about 10,000 rounds of Field Artillery Ammunition advanced a mile and despite a Counter attack, this morning held the position gained. General Owen and General Knox came round our position this morning. General Sir Ian Hamilton was to have inspected today but did not arrive. We have had very little Artillery fire today.

Mail in at last. I received from Nell dated April 5th and May 2nd, also one from Arthur King dated April 25th. All our letters have apparently not come to hand. The news of our doings has evidently just filtered through to Australia, and casualty returns are beginning to make the Australian people think. Capt Jopp gave me two London Weekly Times, which gave very good details of our work here and lists of wounded and killed officers. I am sending them on to Nell. Again a glorious sunset. I wish I could paint the colours as we see them. 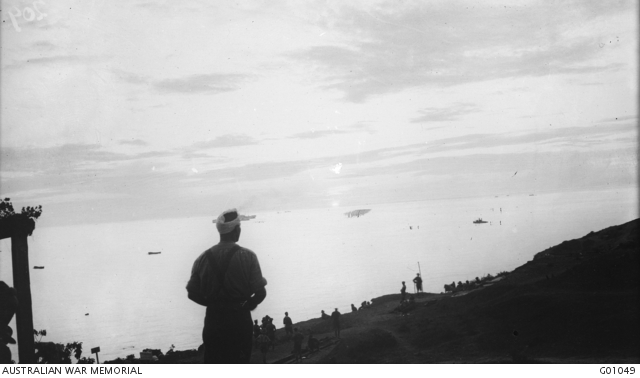 A sunset at Anzac in June 1915, with Private Coffey the Divisional Headquarters Cook
in the foregound (who had been wounded in the head by a large fragment of shell).
No doubt similar to the scene mentioned by Col. Rosenthal (above), with photo taken
by Captain C. E. W. Bean (below).
[Courtesy of Australian War Memorial - G01049]

I think this new chap is the 75 millimetre gun - they have one opposite us now.  I believe she was firing yesterday from a new trench emplacement on top of Baby 700.  I wonder if she is a gun captured from the French.  They got 17 of these gun when they pushed back the French bby means of their poisonous gases near Ypres.

There has been a heavy bombardment down south all day - it was going on last night too.  News has been arriving here of the results since 7.30am.  After the night's bombardment (which began again at 4.30 this morning) the French at 5.30 attacked from their centre + left centre.