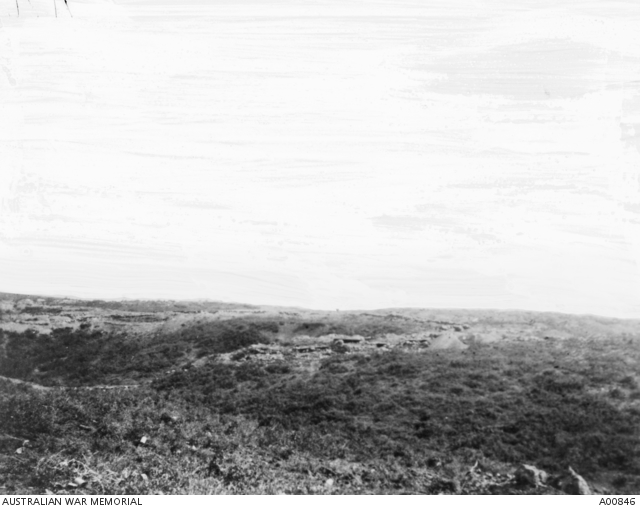 Looking out towards the Turkish position of Kirmizi Sirt in the distance,
known to the Australians as Johnston's Jolly, from the A.I.F. front line.
[Courtesy of Australian War Memorial - A00846]

The enemy are still busy entrenching themselves all round our position.  The roofs + houses have been removed + are evidently being used to make overhead cover [illegible].  About 4pm I fired set rounds from No 4 gun to register various objectives in the front of our left + in the vicinity of JOHNSTONE’S JOLLY by indirect fire to obtain enfilade on their trenches.


All Brigade telephone lines transferred to new Head Quarters station. Met Colonel Hobbs at 7th Battery. Inspected altered emplacement. Told me of a good deal of his difficulties in dealing with Headquarters. Sent in report concerning work of Capt Leslie and Lieut Ross with their detachments on May 5th and 6th recommending them to notice.

At 3.30 PM with Major Hughes met Colonel Johnstone and registered areas in front of 2nd and A&NZ Sections, notably "Johnstones Jolly" which could not be engaged by other Batteries. By actual experiment obtained necessary data to permit of engaging these localities by day or night. Major Burgess’ battery busy on "Olive Grove" guns about 6 PM. Saw Major Martin re road behind our position. Arranged to meet one of his officers tomorrow and point out what is required. Very quiet night.