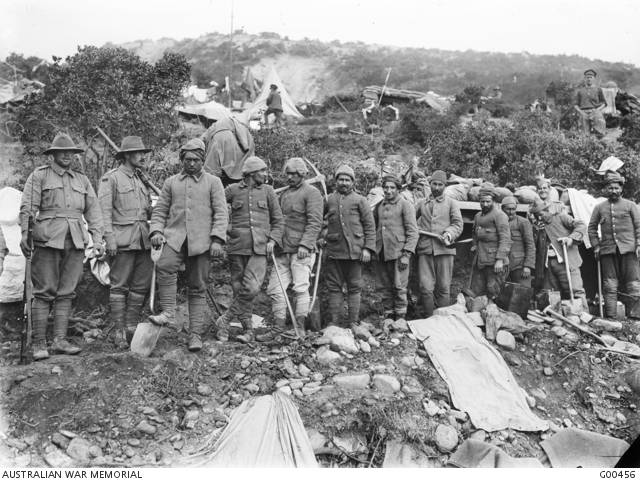 Had a lovely swim in the moonlight last evening. It was simply delightful. There was a bit of shooting at our gun pit early in the evening. To-day I am in charge of guard over Prisoners. Not a pleasant piece of work. The guard has the worst part of it having to stand out in the sun etc and see they do their work.

I have never seen such persistent flies as these Turkish breed. They settle in your bread and jam on your tea dixie mess tin & stick like lice.

It is wonderful how callous one is now to the flying bullets & the splashing shrapnel.

The strapping of our prisoners to the wheel was not a very enviable piece of work.

Two female mules belonging to some Turkish farmer wandered round behind our firing line & seemed perfectly at home. The part round our Battery cook house seemed a very attractive [illegible] to them.

An incident which was very amusing occurred in a gun pit. One gunner on duty was showing some Infantry men. A Sergt ordered another the mechanism of the gun & how it was fired. It had a shell in it & the Sergeant pulled the firing lever to see how it worked. The gun went off and gave the Infantry men an awful big fright knocking them over off the seat. They just fled away. An enquiry into the matter resulted in a reprimand to our Gunner.

Major Browne came to see me during the morning and stayed to lunch. He says my Headquarters are a wonderful contrast to those of Col Johnstone. He has made no attempt to do things properly. Brown says Col Johnstone has some grievance and he hears while he is at Alexandria resting he is endeavouring to get a Light Horse Regiment. I cannot understand a man wanting to leave gunners, but I gather some of his friends are getting promotion over his head and this is not to his liking.

Lt Edwards had to go to Hospital ship today – indications of fever. Capt Rogers is far from well and Col Hobbs appears really ill. He was wise enough to stay under cover today and rest, otherwise he will most certainly collapse. Headquarters Telephone staff well dug into face of hill today. Should ensure immunity from shell fire. Enemy’s Artillery opened vigorously during afternoon, our guns responding. Mackworth and Anderson spent some time with me at my Brigade Observation Station. Good news from Cape Helles. Our troops made a substantial advance.