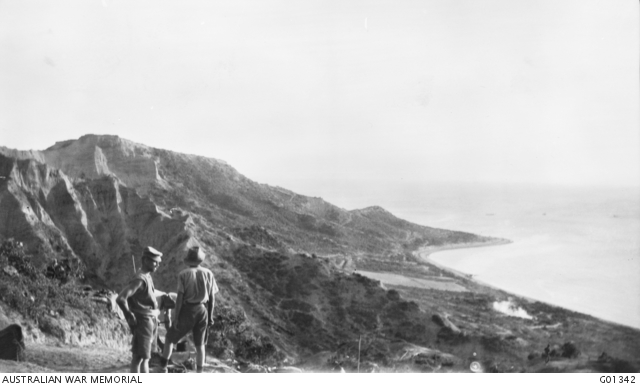 This scene shows how a gun is located by the enemy - the white patch near the beach
is dust thrown up by the blast of a 5 inch howitzer on being fired, taken on the 26th June
1915 by Captain C. E. W. Bean.
[Courtesy of Australian War Memorial - G01342]

It is strange the effect a bit of “nerves" has on some: you can see many men almost physical wrecks of their former selves. Of course there has been complete breakdowns & the men have had to go out for a rest. Last night we opened fire on the Turks and there was a movement of our infantry synchronal with this on the left flank.

Since I returned to gun pit and trench life I find there is not so much stooping required as while away most of these places have been deepened. It is still a very underground army life. Sitting and sleeping about in the deep dug out places. The only redeeming features being a swim after dark, reading off our Peninsula Press News and what magazines we can get hold of. Although we had to be always available to our gun in case of firing there was many fatigue duties digging or erecting latrines cleaning up etc. Sir Ian Hamilton and Staff came around to our gun pit to-day and had a short talk in the pit.

7 rounds of H.E. were fired into trenches + machine gun emplacements on ridge 400 which had been previously registered at 800x.  Considerable damage was done to trenches.

Assisted Major Stewart during the day. Had road widened, magazines for ammunition and vehicles prepared, and our men hauled his guns into position for him. His men very soft and the hot weather playing up with them. Lively cannonade this evening. Sir Ian Hamilton inspected our Section. I met him at 7th Battery.