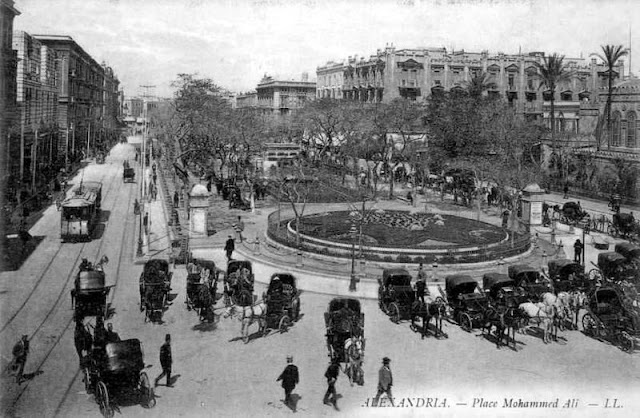 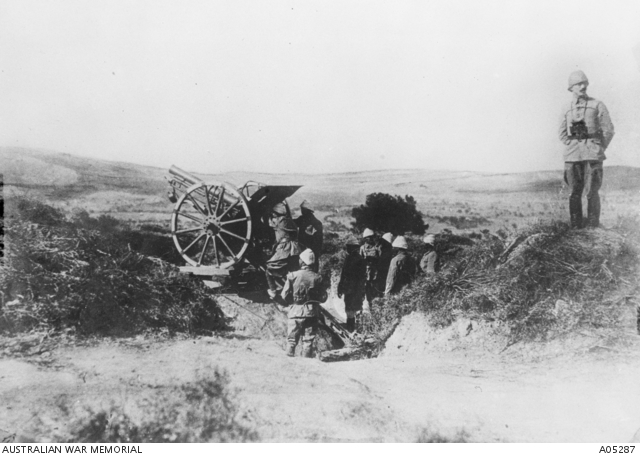 Turkish artillery firing on allied positions on the Gallipoli peninsula, 1915.
[Courtesy of Australian War Memorial - A05287]

6.20AM A Section of Turkish Artillery opened fire from Square 224 P4.  I engaged these guns with No 4 Gun at 2100 which I observed short + increased to 2200.  After 18 rounds had been fired these guns ceased firing.  Observation was very difficult owing to facing morning Sun.

7.25AM A Gun opened on to No 4 Gun from a position I could not locate, but which appeared to be somewhere behind Hill 400.  I made enquiries from 8th Battery if they could observe him but received a negative reply.  Very little damage was done beyond a direct hit on the observers shield.

8.1 AM A Gun opened fire from Gun Ridge Square 212 D4-2 which I engaged with No 2 Gun at a range of 1850x Corrector 166 which I observed over + reduced to 1750x this appeared to be effective as the gun ceased firing.  Fifteen rounds were fired in this series.

I visited the NZ Artillery forward Observation Station with the view of getting information of the gun that opens fire from Hill 400, but with success.

A deal of activity observed all day.

While at work on my Head Quarters observing station this morning one of the B.A.C. Drivers was hit with a bullet. His wound is in the abdomen and is serious. This casualty caused me to look up our Brigade list, which I have entered on the previous page. It shows 7 killed and 50 wounded. A fairly heavy percentage out of 350 men, which is all I have ashore. The remainder are at Alexandria attending to Brigade Horses.

The enemy’s artillery this morning and again this afternoon opened up a smart cannonade, but our guns soon silenced them. Once our shrapnel gets near them they seem disinclined to serve their guns. Otherwise a quiet day.

General Fuller R.A, the senior Artillery officer with the Mediterranean Expeditionary Force was round the lines today with General Cunliffe Owen. The latter did not do either Colonel Hobbs or Brigade Commanders the common courtesy of informing them they were coming around. As a consequence General Owen, who really knows very little of our work from personal observation (as he never comes near our emplacements) has doubtless received what Commendation General Fuller had to bestow. Very quiet evening. I am now writing in my "dugout" at 8.10PM in the twilight and hardly a sound of battle can be heard. The enemy has been very quiet indeed the last three days. A shell today pierced Richards’ observation shield.