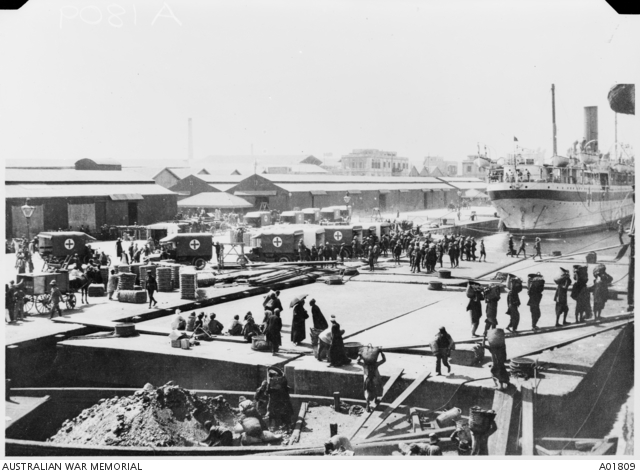 Ambulances lined up along the Alexandria Wharf, awaiting the steady stream of hospital
ships returning with wounded from the Gallipoli peninsula - Australian soldiers returning
to the front lines once healed from their own injuries, like Bombadier Sparkes below, wound
have been faced with this stark duality.
[Courtesy of Australian War Memorial - A01809]

Up early & saw Ted Coleman. Recvd issue of stuff etc Packed up etc. A big crowd of irresponsibles in Details.

Loaded up in motors for embarking at 9am tomorrow. We had some of the wild Australians in our motor who persisted in exclamations and noises at every one as we passed along. On arrival at wharf I was placed in charge of the Artillery Light Horse & other Details to see that they served something to replenish the inner man. I have had little varied experience as to Troopships up to now but the “Annaberg" has beaten everything by far for dirt and other inconveniences. She was most disgraceful in every way and all the Australians were consigned to the lower decks – or I should say the lowest hold a place not fit for pigs. There was nothing to sleep on – no (I have since heard that a lot of these ships are much the same as the Annaberg) blankets – no tables for messing on. There were no life-saving appliances, or one half enough boats to save life in case of an accident. There must be at least over 1000 men on board – what with Imperial Tommies, Australians & NZ’s. I never saw such a mixture of men and arrangements. No wireless or life saving boats or appliances. Dinner was issued and there was a glorious rush and scramble. Loading proceeded but about 5PM we were all ordered ashore and taken back to camp. The only explanation we got was a bomb had exploded in the coal and the bunkers were on fire. I managed to get on a motor wagon back to camp and got back quickly and met Ted Coleman who had just come down to the Detail Camp. We went into town and rather enjoyed a run around although I was fagged.

5AM At 5AM No 4 engaged a Turkish Gun that had opened fire from Square 224 S1 at a range of 975x fuze 1.7.  Only one round was fired as the Gun jammed in the slide (This gun was only mounted the night previous, being sent up to replace one being overhauled).

5.55AM A round was fired at an observing station  in the same vicinity + a little later the Navy thoroughly searched the position.

Major Hughes returned from Lemnos + took charge of 7th Battery while I returned to the Column.

This morning at 5AM the "Bacchante" and "Dartmouth" came off our position and shelled various positions of the enemy till 7AM, when they both went South. Lt Richards on No 4 gun of 7th Battery, located the gun behind the forward slope of Contour 400, which has given trouble lately. It was behind the false crest I had previously indicated to him. As soon as the ships saw Richards’ bursts they swept the place right and left with their shell, and I think they must most certainly have knocked out the gun, though from our position we cannot see. Generally it was like the early days of the war here, to hear Men O’ War Loosing off their broadsides. Major Hughes returned to duty this morning also a Sergt Bow of this Battery in addition to the Q.M.S. of 3rd BAC. Generally a quiet day.

In the evening as usual the Olive Grove Battery opened on us, with our usual reply. Destroyer firing on what we think is a Head Quarters for a Section of Coast Defence. I wish I could be allowed leave to make a night sortie in that direction. I believe it could be successfully carried out. Capt Harris at my Headquarters re visual signalling. Line to D.A. duplicated and laced. Our mail has for some unaccountable reason been sent back to Alexandria – for sorting I understand. Only a few papers came across, and every body is incensed at the delay. 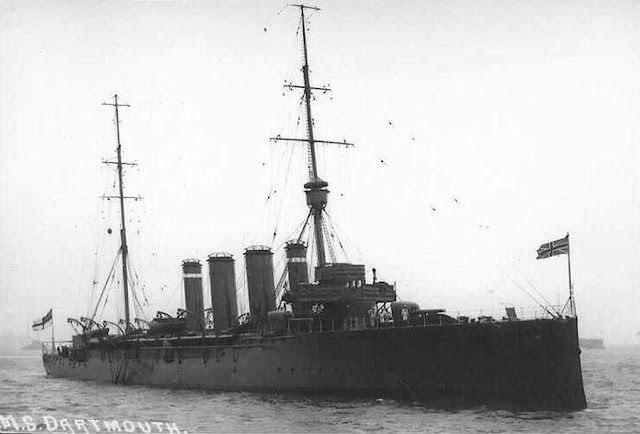 The H.M.S. Dartmouth which, alongside the H.M.S. Bacchante, heavily shelled
positions in front of the 7th Battery.
[Courtesy of The Gallipoli Association]