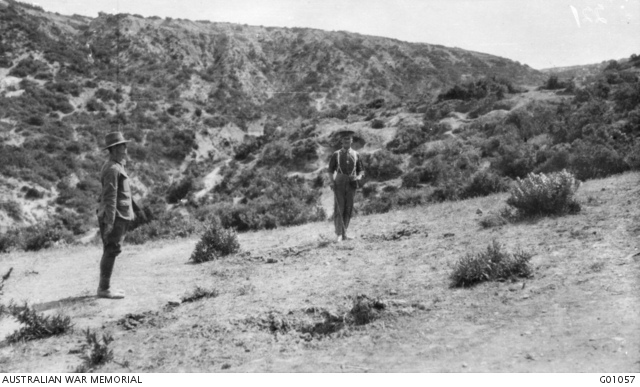 Small Green, north of Shell Green, showing holes made by enemy shrapnel searching
for Burgess Battery. Col. Hobbs is standing centre, with 400 Plateau being the high
ground in rear is 400 Plateau.  This photo was taken in June 1915 by Capt. C. E. W. Bean,
& may well have been one of the photos taken during his visit to the 3rd Field Artillery
Brigade's positions on the 15th June (below).
[Courtesy of Australian War Memorial - G01057]

We were still at the wharf at daybreak. Anchor was weighed about 8 o’clock. I was overjoyed to think we had at last started. It was dreadfully hot and my spirits received a rude shock as we moved out to an anchorage off the sea wall and dropped anchor. A Parade was held at 10am & arrangements made for messing. The outlook was not too promising as it was fearfully warm – no canteen of soft drinks etc. Something seemed to be afoot as two steamers came back in the harbour that had left with troops a few days ago. The usual crop of rumours were as persistent as ever. At last at about 6 o’clock up came the anchor & we headed out to sea. A submarine guard was posted and life belts issued, and as one can imagine, it was all torpedoed talk. It was delightful to sit on deck and enjoy the brisk ocean breeze once again.

No artillery fire on the right.

A few shell over us this morning. No damage done. Col Hobbs went round the whole Artillery position with Capt Bean and gave him "first-hand" Artillery information. Cameron returned to duty with HeadQrs from Capt Trenchard’s Howitzer Battery. Heard today that Col Legge had been made a General and appointed to the Command of our Division. Personally I am very gratified that an Australian Officer is to be our Commander. I believe he will be here in a few days.

Went round all the Australian Guns except the one in Caddy’s Batty on Walkers Maclagan’s Ridge with Col. Hobbs today.  He gave me a splendid look round – is kindly + very keen + well up in his work; but I cannot think he is a really good commander of artillery – Others – his own staff especially – say he is, but I’m sorry – I can’t believe it.  All along he has impressed me as being really a man who, however keen, could never get a real hold on men, you can only go on your impression + that’s my firm impression still in spite of having tried to think otherwise.

The position of the Guns, and the Enemy’s guns I have written up in diary May 4 (p. 19 black Diary) The Turks have been shelling the Pimple (prob. because they know there’s tunnelling going on there)with an 8 in. guns somewhere ENE – possibly at Kumkeui or on the Anafarta Rd.  One shell caught a machine gunner lying on a ledge inside the trench by B. Browns battery + took off first his leg then part of an arm then hit the ground + went off to somewhere unknown over the back parados of the trench.  The chap was not killed – he was quite cheerful + was telling his mates that he expected he’d get his living selling newspapers when he got back.

Brown’s Battery has had it v. hot at times thro being on the Pimple – (the reason why the 6th got it so hot in the early days; + Philips always gets it hot bec. he is on top of 400 + fires on Quinns.  There is fortunately a bit of a false crest in front of him + also they can’t see most of the shells which burst behind him in the valley.  The ground in front of him is simply pitted with shell – all small stuff but there must be a hundred holes at least – probably more.  The shield of one gun has a large hole in it + I don’t know how it survives.  Our gunners are taken careless about getting green stuff for their gun screens.  All these guns were covered with old brown shrubs + were the easiest thing in the world to pick out. In the case of one of Jopps guns indeed the screen had partly fallen down + I saw boys were most obvious.

The Enemy have been making a fire line of trenches on Kilia Pine Ridge (I got a photo of these from the parapet).

The Enemy are also sapping across the edge end of the gully between Popes + the N.Z – so are we lower down.  They had a curious opening like a Sally Port at the head of gully between

Popes + Quinns – a square hole open to us low down in the trench  - can’t make out what it’s for.  They’ve alas been making a very wide road up at the head of one of these gullies and two emplacements.  I think we saw from the Indian Battery observation post a telescope shining in one of these emplacements today.

The Enemy was also showing A lot of mounted Officers in batches have also been riding up to + away from a place far over to the back of Krithia Hill.  The monitor + a destroyer put a lot of shells in it today – Jopp was observing for the monitor tho she fired off 5 rounds before she followed his direction + altered 150 yds or so.  The officers had gone away ½ hour before – but some came back.  Men could be seen running out to take away the mules.  Caddy has altered his shooting at one target – “C” I think – He adopted the plan – rather elementary I must say it seemed to me – of sending his Sergt to another point + getting a second observation at an angle from his own.  He then found that he had prob. been about time about 150 yds away from his target + to one side of it.  I wondered why he had not tried that double observation before.  I thought they always did it.

By Phillips H.Q. on the hill – or rather near to the new 1st Bde H.Q. (2nd Bde has taken their

old one) is an old Turkish trench + some of our trenches cut in the early days.  The T. trench is on the N. edge of 400 across a small gully from it, + faces down the gully.

Probably owing to the Turks having crowded up + cut the wire on a [illegible] the 3rd Bn were not 10 yds away from it, we have now a set of trench standing orders giving a new system for our trenches.  The chief point is that a sentry group of 6 has to be responsible for every 12 yds of trench - + two always on duty – a spotter + sniper by day + two observers by night.  The group on duty must always be ready.

Smith of the 12th has four lines of trenches now + puts one lot of men into each every day.  (1) in the fire trench.  This lot will be tomorrow (2) in the rearmost line getting absolute holiday.  They have to (3) do most of the fatigues the next day + are in (4) the supports on the [illegible] day - + so on.

The men have been issued with instructions as to precautions against gas but I don’t know if the respirators have been drawn or have arrived.  The instructions are a little childish, it seems to me, for our men in the obviously tinged by an anxiety to show that it is fatal to run away + safest to stay or charge forward.

The aeroplane was over today flying low + getting shot at.  Took 2 photos of her from Rosenthal’s H.Q. also photo of Parker’s gun (Burgess Batty + the other gun near him – the graveyard at Hell Spit, + on the hill by the pine near the first gun of Hughes batty; The Pine Ridge trenches (Turk – yesterday I got some photos of the 12th Bn trenches – almost invisible and of a good day out on the road behind the 12th).

The anafarta gun did not open till this evening when she blew a mule to pieces in the next gully to us + killed several others.

Several of the battalions make use of an ingenious voice pipe – an iron pipe with tin funnel to work below batty + telephone stn.

The first tolerably rough days (with one exception) today + yesterday - + they say we are without water on the beach tonight.  Donaldson is get none when he went down, anyway.  The pier is unfinished – one shell went v. near it + the tressels are [illegible] knocked about by the tiny waves – not the shell.  The waves even so weren’t approaching roughness.

Another uneasy night (as usual) at Quinns.

Bazley + I had an experience with flies in here last night which was rather like delirium tremens, we literally fought them for ¼ hour - waving towels, burning Keatings scattering them.  We must have killed one or two thousand but only excited them.  They swarmed in our faces, crawled all over us (I suppose the Keatings made them silly) dropped off the ceiling onto the floor.  The place was filthy with them this morning – nothing but dead flies.  We turned it out + swished it down with creasol + it is comparatively free today.  But perhaps the cooler weather accounts for that.  The men find the flies at present far worse than the Turks.

Was sniped at twice today whilst looking over the parapets.

People in Australia, when 50 casualties were published, seem by the latest papers to have been almost shocked.  We know that by then the list was really 5000 for this Divn alone, + we can’t help wondering what they thought.  I am hoping that J’s wound was announced to father + mother in a comforting form – My cable may have arrived first saying his wound was not serious.

It is rather cold tonight – 3.25 or I suppose by MEF time which we have to use now because the French use it 1525 – no, 0325 of course.  The G.H.Q. would have these brainwaves + do such solid work as wheeling wounded men from dressing stn to beach or telephoning its orders for attack in reasonable time we might be a little nearer Achi Baba.

However – it’s 0325 + it seems to be flowing up for the storm which is overdue + the Hospital ship is out there very beautiful with her green stripe + red cross brightly lit - + I am going to turn in.