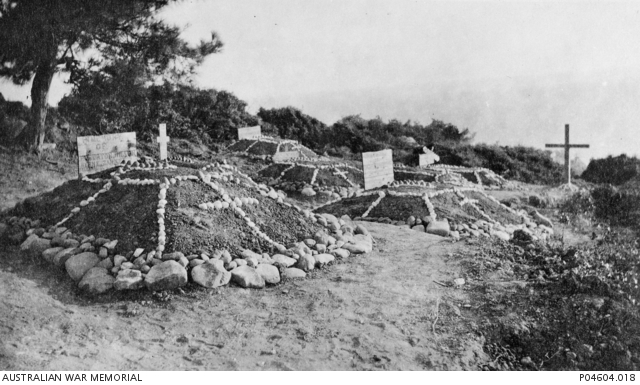 Graves within the small Shell Green Cemetery below the 7th Battery positions,
mentioned by Bombadier Sparkes below.
[Courtesy of Australian War Memorial - P04604.018]

It is strange to see the many different styles of dress adapted by our lads. You see them all over the ridges and our firing line now in short britches. Some showing the poor tailoring efforts in shortening the long ones. Others turned their trousers inside out to stop the vermin breeding. A few were found in rather amateurish style. Some resorted to freakish hats and caps and other Deshabble uniforms. It is also peculiar to see a [illegible] smiling through a bunch of whiskers. Every one I ever meet is letting nature take its course. I did so until I got to Alexandria when wounded. I must have been somewhat like the wild man from Borneo judging from the reflection of my appearance in the looking glass. I had it all removed except my moustache. This morning broke with a hot fusilade of shelling. I was up early and went down the ridge below where we had our guard room pit. It was lovely and cool & the cooing of the doves was the only music to greet me until the guns burst out to spoil the strains of nature.

There are many funny names given to the different parts of our field of battle. Between the beach & the firing line is Shrapnel Gully – a place very appropriately named owing to the amount that the enemy sent to that spot. Casualty Corner is another spot on the beach and [illegible] which you must hurry as a Turkish sniper on a far ridge gives you a taste of his bullets.

Anzac Cove where nearly all our landing takes place now should be a celebrated spot in the future and no doubt looks or other Tourists [illegible] will advertise trips to this celebrated immortalised place. Up on the ridge near our gun is a pretty knoll where a number of Queenslanders are buried who so bravely bled for their Empire now before resting. The graves have been decorated with crosses and stones by Qld Pioneers of the 9th Battalion. I noticed names on the crosses of Corp Baldie, Pvtes E. Bird, E. Booth, [illegible], D. Hall Pv E Taylor (9 May same day as me), L Corp Davton, Corp Pentecost, Priv A [illegible], EL Gilmore, [illegible], Clarke, Barlow, Stevenson, Mc[illegible] Jeffereys, Haig and [illegible]. One felt thrilled as you gazed upon the last resting places of our heroes I’m looking out across the green fields from our gun pit It was a charming sight to look out upon from our gun pit. The fields nearby are still lovely and green as when I left and bathed in the brilliant sunshine with the dazzling colors of the world made the landscape a charming picture. Could enjoy it best early morning or at sundown when there was not the piercing shriek of the shell or the crack of the bullets to break the harmony of the picture or ones thoughts occasionally had a lull. The ground between our trenches and the beach was not of course like pictures taken. There had been too many Australian Kangaroos [illegible] from the shouts and treading over the green [illegible].

The enemys shells came crashing and raised sods of dirt to a terrific height. They fell at regular intervals – a kind of malignant aberation seemed to characterise their efforts. The shrieking shells are hardly [illegible] us with some of the lovely sunsets seen every day here from our high ridge. His Majesty sets in all his fiery splendour just on the edge of a high island in the Agean Sea and there is nearly always a strata of cloud overhanging the island and the effect is glorious. This island is a good height out of the water but does not appear to change. It is North of Embros Island. The setting sun as he kisses the sparkling ocean throws rays of lovely tinted hues for miles and the clouds are also very finely illuminated with a similar effect.

I don’t know if I referred before in my letters to an operation we call “chatting the Enemy" every day almost all of us have a chat but it’s never a chat in the sense that the word conveys but it means to convey that we were just cleaning the vermin off our shirts & clothes. I had heard of these things in connection with serving in wars but its very simple to have these parasites on one under the conditions we have got to live in. Not getting a chance to change or wash clothes living such an animal life. Are you “chatty" – is a well known question on all sides.

Chathams Post, Boulder Dump, Hell’s Spit, Quinn’s Post – Pope’s Hill other names
Beach Bill the name of the gun - as we call it that fires along the beach and gets many victims.

The mules and the Indian men are still doing splendid work carrying stores up the ridges. Nearly all this work is done at night. I had another swim in the moonlight last evening and there must have been at least 4000 ducking about. Very little swimming is now done in the day as there had been too many casualties. 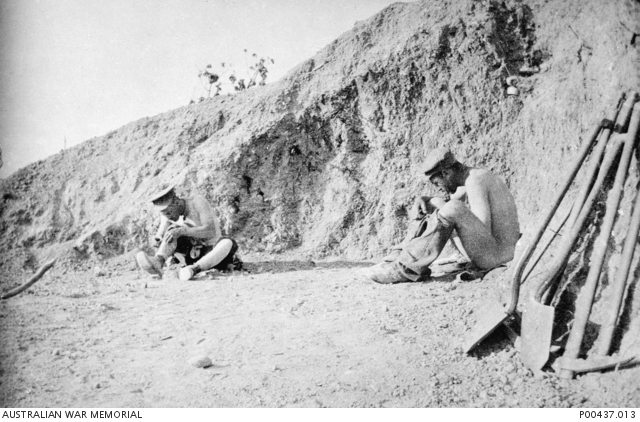 Two Australian soldiers 'chatting', a euphemism for searching their clothing and skin for
lice described in William's diary entry above.  Note the soldier in the foreground, naked
apart from his cap and trousers pulled down below his knees.
[Courtesy of Australian War Memorial - P00437.013]

Enemy opened from Gun Ridge our No 2 engaged their gun firing from reverse slope below crest fired 13 rounds when an other Turkish gun opened on No 2 which withdrew after firing 2 rounds at second gun. 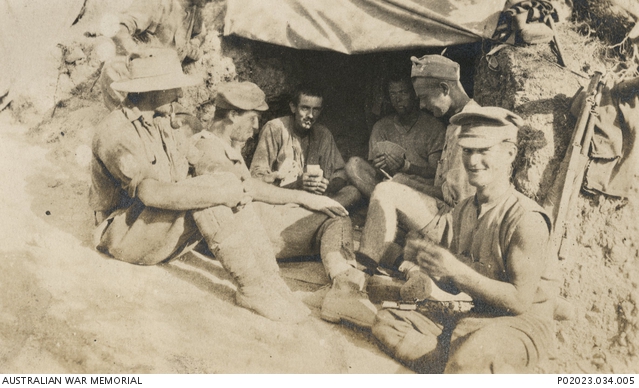 5th Light Horse Troopers playing "[a] quiet game of cards" in a dugout on Gallipoli,
in the trench lines visited by Col. Rosenthal below.
[Courtesy of Australian War Memorial - P02023.034.005]

At 7AM the enemy gave us a brisk artillery reception. Burgess and Hughes responded, also the Mountain Battery but took some time to locate and silence guns. Again about 8.30 the enemy opened. One shell caused 9 casualties in 9th Battalion lines, adjoining my Head Quarters, one man being killed. This morning with Col Arnott I examined L. Horse trenches on "A" ridge. They are getting gradually nearer Gaba Tepe. Howitzers opened again from Gaba Tepe on shipping. Col Arnott wants to "Scotch" Olive Grove guns. I told him I was after that job, so now he wants to take on "Wine Glass Hill" guns and us "Olive Grove". We shall try to work out a joint scheme for Headquarters approval. Getting telephone exchange into new "Dugout". General Legge arrived today to take over our Division. Colonel Johnstone reserved duty with 2nd Brigade after a trip to Alexandria and Major Brown resumed Command of 8th Battery. Lieut Garling temporarily attached to 8th Battery. A Scottish Territorial Howitzer Battery arrived today and is attached to my group. Strange it should have the same number as my old Howitzers; the 5th.