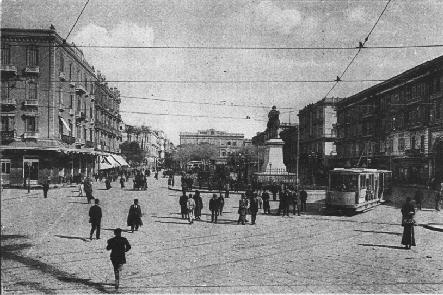 Downtown Alexandria, as would have been visited by recuperating Australian soldiers.
[Courtesy of Mistersaly]

Captain Jack Fitzgerald called last evening & left note that he was back and I took an early trip in to see him also met Mr Hogdens etc.

Went down to Base Details Camp at 6PM with them. Here we were informed that a ship was leaving in the morning and we could go by that. I immediately went out to Zihriah Camp and said Good Bye to our Battery Drivers. Also read a batch of letters. Went to Town and got some cigarettes for to take back to our Chaps at Gaba Tepe

4.30AM A Gun opened fire which I could not locate.

6.5AM I engaged Gun that had opened fire from Gun Ridge Square 212 D4-2 with No 2 Gun + with the assistance of observations from 8th Bty swept the reverse slope at 1800-1900x Corrector 168.  Twelve rounds were fired and the gun ceased to reply.

10-AM I engaged Turkish Gun which had reopened from Gun Ridge but four rounds only were needed to stop him.

11-15AM Received report that Snipers were worrying the beach from Twin Trenches Sq 212 A6.  I ordered No 1 Gun to fire two rounds percussion at this target + splendid effect was obtained at 1550x

6.40pm A party of Turks were discovered in the bed of a creek at the foot of Gaba Tepe Square 212 B7.  No 1 Gun engaged them at 1825 putting three shells right among them, which must have done considerable damage.  A gun opened fire on No 1 but I could not locate him but from the trail of a falling shell have marked the line of fire + am keeping likely spots under observation. 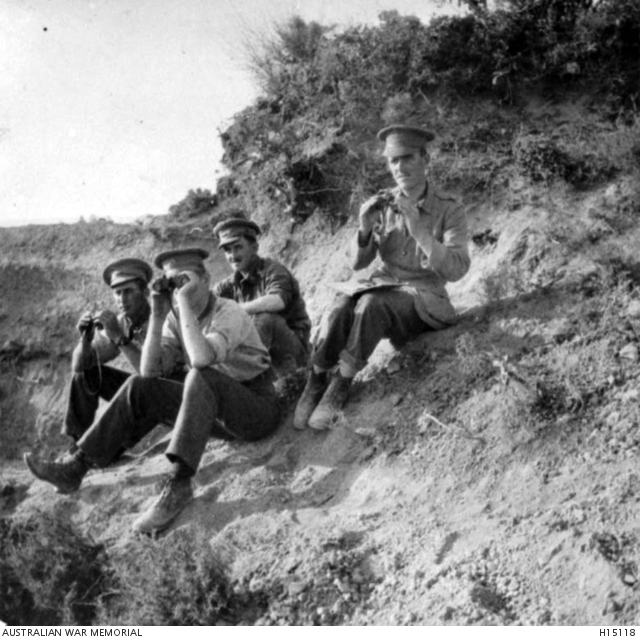 A group of Artillerymen searching for the location of an enemy gun, which
was shelling the Australian trenches from the direction of Gaba Tepe.
[Courtesy of Australian War Memorial - H15118]

The day opened with a lively cannonade from the enemy’s guns, replied to by our own Artillery. The enemy is using percussion shell, and is trying to break down our earthworks and trenches.

Shooting commenced before 5AM and continued till 6 AM. We have now taken over our new Brigade and Naval Observing Station, and just as well we moved. At 11 o’clock today a shell burst over the old position and killed two men. Enemy’s Artillery got on to 7th Battery during the evening and our old friend the 6" Howitzer also spoke, firing 5 rounds. As indicating the enemy’s difficulty in concealing their guns and still being able to bring effective fire to bear, two of his rounds today from "Gun Ridge" hit his own crest. Colonel Johnstone left for a week’s rest, Major Bessil Browne taking over from him. A very quiet night.

Got letters ready for tomorrow’s mail, to each member of the family and one to the old folks and Emma.