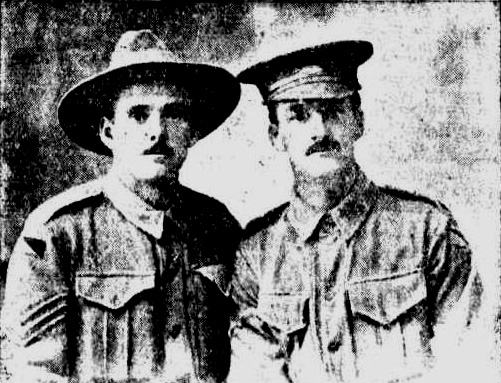 The photograph of Bombadier William Sparkes (right) & Corporal Edward
Coleman (left) taken in Alexandria whilst recuperating from wounds received
from Gallipoli, noted by William Sparkes below - the photo, sent home to
William's mother in Australia, was published in The Telegraph on
the 24th July 1915.
[Courtesy of National Library of Australian - Trove]

Another trip to town. Sent letters home packet & Corp. Coleman & I were photographed. Visited Presbyterian Mission & other places. Ended up at [illegible] Cafes full of men – Bars & wines etc. Found Egyptian Gazette office to see re Paper & to printing - amused Ted Coleman. Asked Dr (colonel) to let me out and he referred me to Colonel who asked me several questions & whether I felt quite fit & I said I would be willing to take risk on leaving he asked me if I was a regular. I felt a little flattered at hearing this from an Imperial Colonel.

2AM Heavy musketry firing started about centre of our position + several Star Shells fired towards.  3AM firing quietened down.


5.30AM A gun opened fire which were were unable to locate, but only fired a few rounds.

3.15pm Capt Rogers 8th Bty reported a party of Turks building earthworks on Southern Slopes of Gaba Tepe.  I asked him to observe while I engaged same with No 1 Gun.  9 rounds were fired + the range registered at 2475.  Capt Rogers reports that the effect was good.

7.5PM I endeavoured to range on some wagons travelling north on road running along foot of Hill 600 with No 1 Gun.  Two rounds were fired at 5500x and 6000x but both fell short. 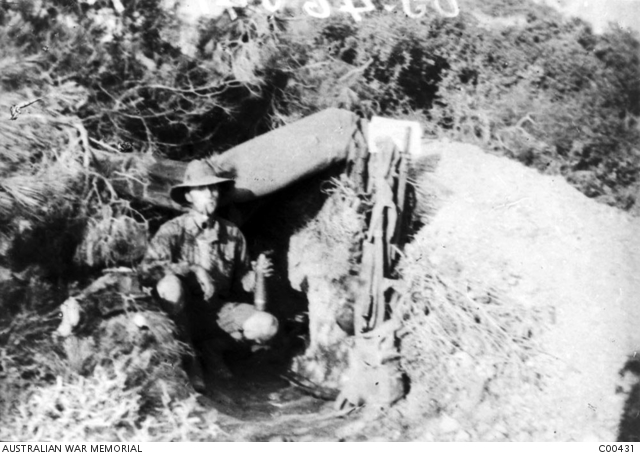 By June 1915, unexploded ordinance collecting had become a 'healthy' pass-time
for many of the men on the peninsula, especially the artillerymen whom took great
interest in examining the fuze mechanisms & payloads of their Turkish adversaries
(as per Col. Rosenthal's diary below) - above, a 5th Light Horseman poses with lit
pipe whilst holding an unexploded Turkish shell, likely in trenches alongside the
9th Battalion & 7th Battery.
[Courtesy of Australian War Memorial - C00431]

Two very heavy rifle fusillades during the night, possibly enemy attacking. Completed Brigade Forward officers observing station and Telephone recess, and put up necessary notice Boards. Fairly heavy cannonade late this afternoon. Our guns replied and silenced the enemy. Major Burgess did some damage to a group of horsemen and a train of camels Southward. One of the Headquarters staff brought me in an unexploded high explosive Turkish shell. I have the fuse which is rather an interesting one, but the shell I am afraid we shall be unable to empty. It is a similar type of shell to the one that entered my old "dugout". We find mails will not reach here till tomorrow evening. The reported big bundles of mails coming ashore proved to be bags of meat. The Artillery roadway is nearing completion, and will be a great boon for all arms of the service, particularly Infantry moving in formed bodies. Capt Jopp returned to duty with me two days ago, and I am now using him exclusively as Forward Observing officer for this Brigade, while my orderly Officer, Lt Richards is temporarily loaned to 7th battery. Mr Forrest is for the present acting as Adjutant.