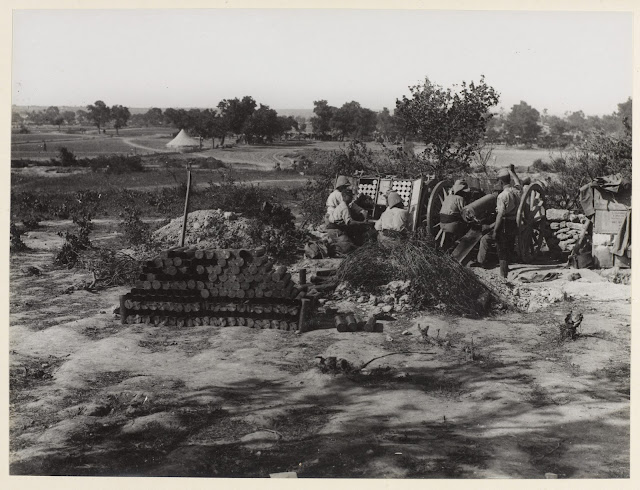 A French colonial 75mm artillery piece in action near Sedd el Bahr during
the Third Battle of Krithia, as part of the massive artillery bombardment
of Turkish positions on the 4th June 1915.
[Courtesy of National Army Museum]

Quiet during day.  I was ordered to LEMNOS for a weeks rest + embarked on trawler 7pm returned on 11th inst to ANZAC during my absence Capt. W.C. Waite was in command. 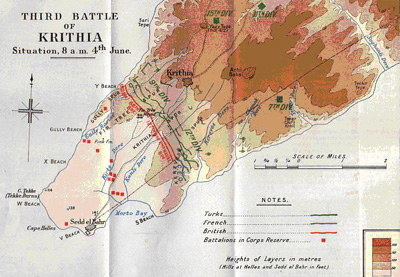 "It was such an inferno of noise, that I was stone deaf for a fortnight afterwards;
and there was a tornado of hellish fire, so fierce and terrible, that spread death
and destruction all around. Any orders that were given had to be passed down
the Trenches from man to man, by his yelling in to the ears of his mate as
loudly as he possibly could. The bombardment consisted of shrapnel and
lyddite; and shells in thousands were dropped, blowing parts of the Turkish
Trenches to atoms, and completely carrying away the barbed wire entanglements
which the enemy had erected. Every shell that dropped seemed to tell; for we
saw, hurled up into the air, Legs, Arms, Heads, bodies, parts of limbs and every
imaginable thing. It was an awful and fearful sight, most gruesome in the
extreme, and blood curdling" (Private Ridley Sheldon, 1/6th Manchester
Regiment, 127th Brigade, 42nd Division).
[Courtesy of Gallipoli and The Anzacs]


I was awakened this morning by heavy gun fire. Evidently our people down south are storming the heights for a terribly heavy cannonade from land batteries and naval guns has been in progress all day. There are about 115 land batteries, and I anticipate at least 30,000 shells have been fired there today from 12" downwards. We have been watching the cannonade and it is difficult to imagine how anything could live in the inferno there in evidence. Major Hughes has been granted a weeks rest and leaves for Lemnos this afternoon there to recuperate on the "Minnewaska". He has had a very strenuous time.

Our men make much use of a disgusting adjective and I am always checking them. I passed a group today in an Infantry trench freely using the same word. I told them I was surprised to hear Infantry using such language. "If you had been gunners, I could perhaps understand it," I said. The ringleaders reply was "Gor Blime, we are _ _ Gunners." Then I found out they were a machine gun detachment. This note is to serve me as a reminder, for a Diary is hardly a fit place for such language.

Tonight our troops carried out certain operations. It was intended to secure and permanently occupy trench in front of "Quinns." I have no knowledge of what occurred on the Left Flank, but on the Right Col MacLagan sent out patrols, who returned in due course reporting that trenches immediately to our front were unoccupied excepting for a few men. I stayed with 7th battery till 12.30 PM. I had a narrow escape from rifle bullet wound.

I was talking to a Sergeant in No 2 gun emplacement when I felt a tap on my left shoulder. On examination I found a bullet had penetrated the collar of my jacket, entered the cloth again just under the shoulder strap and came out again about 2" further on. Went round 9th Battery position with Col MacLagan, he having resumed duty to day after a short leave. Heavy Field Artillery cannonade during the night, but the result I do not yet know.