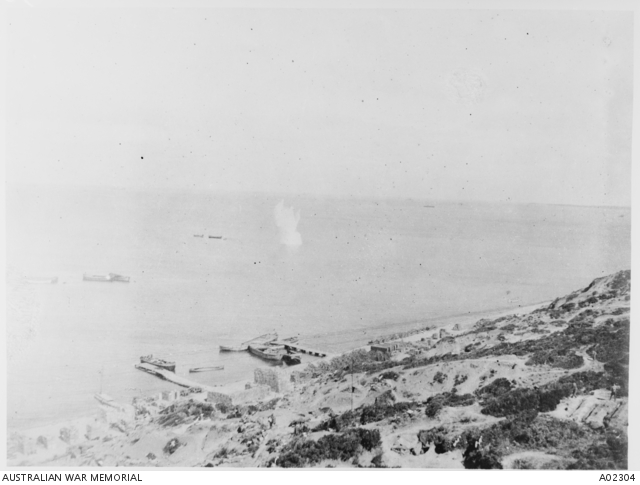 The beach at Anzac Cove under shell fire.
[Courtesy of Australian War Memorial - A02304]

Corp Coleman & Lieut Hodgens returned to-day. A Cruiser came over to-day & fired a few broadsides into part of hill no 2. She was surrounded by Torpedo Destroyers to protect her from Submarines.

In went along beach at sunset and one gun of the enemys called Ab Dullah sent several shells towards the landing beach. It was intensely funny to see the scatter of the swimmers. I fled also I can tell you and had to hop in an old unused dug out for about 15 mins. Shells burst all around our hiding place and a few shrapnel pellets fell into the dug-out but luckily did not hit me. It’s not too comfortable to be alone in these circumstances as you might get badly hit and get no help. I walked along and saw Major Griffith and on returning along the beach I had a dip as it was then dusk and the moon was shining beautifully on the rippling water.

A party of horseman evidently a staff was observed on forward slope of gun ridge No 4 Gun put 5 rounds into them at 1900.  As riderless horses were seen afterwards some effect must have been obtained.  Lt S. Hodgens joined from Alexandria + Corpl Hase Coleman (wounded) + Gnr Haseman rejoined.

Interview with Col Hobbs and Major Stewart (5th How battery) regarding positions for 5" Howr. Accepted the spot I had been reserving for the Australian Howitzers. Showed Major Stewart round the position. He and his officers had lunch with me. During the afternoon he commenced terracing for his men. Damaged gun of 7th battery having been repaired was put back in position.

Br Macfarlane of 7th Battery badly wounded by machine gun fire. No 4 gun got onto a group of staff and did good work. Showed Colonel Arnott round our observing stations. General Legge arranging for Australian Howitzers and ammunition to be cabled for immediately. High explosive 18pr Ammunition used here by us for first time. 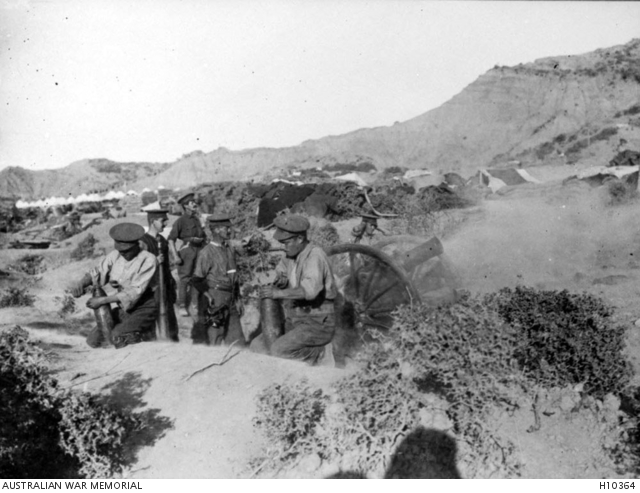 A British Territorial Army gun crew firing a 5" howitzer at Anzac, similar
to that mentioned by Col. Rosenthal above.
[Courtesy of Australian War Memorial - H10364]