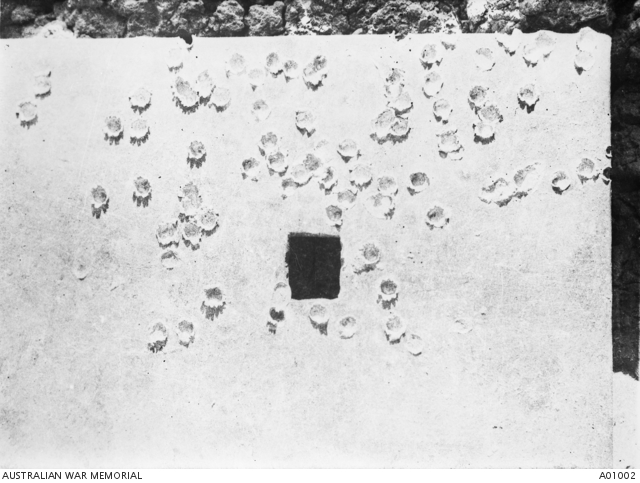 A metal loophole plate used by the 1st Battalion on the Australian firing line
(in a similar fashion to the shields utilised on the field guns mentioned by
Captain Waite below), showing the marks of Turkish snipers' bullets - this
plate had only been in position a few days.
[Courtesy of Australian War Memorial - A01002]

Gunner A. C. Reid, of the 7th Battery, 3rd Field Artillery Brigade, in a letter to his mother, Mrs. G. C. Reid, of Borva, Gladstone-road, South Brisbane, writes: "It seems ages since we left Queensland, and our six weeks of active service here seems much longer than it really is. At first, of course, it makes one feel a bit uncomfortable when one hears the bullets whistling past and the shells screaming overhead. Screaming appears to be the approved word, but they kick up all sorts of rows, especially when they come close. However, one soon gets used to it, and treats it as a matter of course. This is really the only way to look at it, and we are all cheerful and enjoying ourselves as much as possible under the circumstances. I have been feeling A1 since we landed here, and have become reconciled to biscuits and bully beef. Besides these, we get bacon, cheese, jam, and tea, so you see we are not so badly off. The weather so far has been great; we have only had a few wet days. We can always get any clothes, &c., we require. I duly received the newspapers you sent, but had a job to keep them long enough to read. We devour every scrap of printed matter, including the advertisements. War news is printed in the 'Peninsula Press,' so we are posted as to how things are going. I saw in the 'Brisbane Courier' that they are getting stuck for recruits in Brisbane. There must be hundreds who are able to enlist, and I don't know how they can stop behind. If they only heard some of the things said about them here they would not be proud of themselves."


As published in The Brisbane Courier on the 22 July 1915.  The above letter was sent
from 1733 Gunner Alexander Cumberland Reid, to his mother back in Brisbane - the
statements surrounding the receipt of newspapers & enlistment may very well be spin
added by the newspaper, as almost identical statements appear in all letters published
by The Brisbane Courier attributed to men of the 7th Battery.
[Courtesy of National Library of Australia - Trove]

5.40AM A Gun opened on to our Infantry Trenches but I was unable to locate him.

A Sniper who was well posted in front of No 4 Gun persisted in making things uncomfortable + succeeded in putting over 30 shots on to the shield.

Was aroused about 5.30 AM by enemy’s guns firing on Major Brown’s gun emplacements. Mountain Battery engaged them, but 9th and 7th B.Cs could not locate target. Shortly after mountain Battery opened fire enemy’s gun ceased firing. Established today Brigade Forward Observing station with Capt Jopp in charge. He will remain in his present "dug out" on the position and will be relieved by Lieut Richards and W.S. Forrest at intervals, and will also have Telephonists and observers with him as well as obtain information from Infantry observation posts. This Brigade station can communicate with all Batteries and if necessary direct their fire. Naval observing officer will also observe from our Brigade station.

With Colonel Hobbs, Major Brown and Major Burgess at the latter’s observation post. Fairly warm artillery fire while we were there, directed at Phillips Battery. Major Burgess decided to move his observing station to a spot close to my station in the lines of the 11th Battalion. He has also prepared an emplacement close to his No 3 gun for Brighton Battery gun. Track from 3rd F.A. Bde HQrs being taken along to Head Quarters 3rd Inf Brigade, and steps from our HeadQrs to firing line arranged for. Artillery road around whole position commenced today. Major Brown preparing an alternative emplacement for No 4 gun. Our aeroplane again flew overhead this afternoon and dropped a bomb on the Enemy. "Ah, there she lays another egg" is the comment one hears among the Infantry when a bomb is dropped.

Sortie in front of "Quinns post" tonight. Fun commenced at 10.30 with a heavy rifle fire and plenty of trench mortar bombs. Fighting was continued fairly vigorously all through the night. Have not heard result. Heard today a big mail of 350 bags had arrived and would be unloaded this morning.