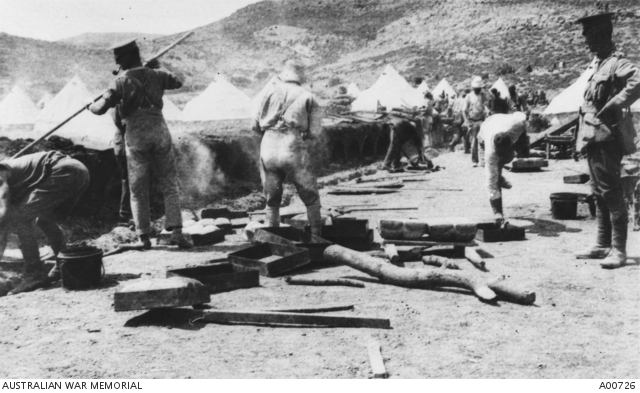 Men of the 1st Australian Field Bakery, Imbros, baking at a long row of ovens - freshly
baked bread is in the foreground along with baking tins and wood for the ovens.
[Courtesy of Australian War Memorial - A00726]

I do not think I mentioned before that we now get fresh bread every 2nd or 3rd day. It is baked over at Imbros Island and sent across. Imbros Isl is only a few miles away and you can see it well from our firing line & I can assure you it is greatly appreciated. Last evening Corp Coleman & I went for water but alas were dissappd as all that could be obtained was brackish owing a hole having been made buy a shell in the pontoon while coming in. On returning we had a moonlit swim. The moon rose a bit late and its silvery face smiled over the ridge above the beach just as we entered the water. It was charming to see the streams of silvery light reflected over the rippling ocean swell.

Lieut Archie Raymondo is now posted to our Battery and looks well. He was previously acting as transport officer. Lieut Richards is officer in charge of one of our guns – a real good sort. Capt Crisp of the 9th Battery was transferred to gun Battery in place of Capt Leslie dead. Lieut Urquhart has gone back to Alexandria – a wreck – enough said. Lieut Hodgens has come over from Alexandria & Lieut Ross is still at No 3 gun. Our Major (Gus Hughes) is not well and looks as if he wants a good rest from his responsibilities. Sergt Major Handsford is still the same old customer.

Capt Dr Marks is much thinner than when we left Mena.

Weary Willie the name we call one of the guns of the enemy commenced to shell the beach again to-day. The shells have a weary kind of shrieking sound – hence the name applied to the gun.

At 11am a determined attack was made by the Imperial Division on Achi Baba. We had instructions to stand by in case we should have to prevent any reinforcements attempting to reach the enemy forces there. As I write there is the continual boom boom of heavy guns and flashes all over the far slopes. There are a number of the Australian and NZ forces helping the British Imperial men there and in other attacks on the same position. Their behaviour is spoken of in the highest of terms of all the British Leaders.

In the afternoon we received instructions to engage the Turks at our end so it would prevent them from sending any reinforcements along towards Achi Baba. Several parties went out – one on our right flank and one on gun ridge. The latter one was comprised of our Qld 9th Battalion and the Qld 5th Light Horse. They did some splendid and brave work but suffered badly. A number to the extent of 30 inj one of the 9th boy’s was missing. Amongst the killed was Corp Hunter who I had come into contact with while the 9th was on duty near our gun pit. Dingley a very fine dark chap was another who fell. I understand the object that was desired by the generals was achieved and the Turkish Artillery replied to our guns with an unceasing fire till sundown. We did a little of what the wily Turk had been doing at Gaba Tepe – and that what to fire about a dozen shells and run the gun out of our own pit into a deep roadway cut into the ridge. They sent about ½ a dozen shells right into the pit but fortunately (Captain Bean the official correspondent of the Aus Papers was in the trench near our gun & took a snap of us at work) we had the gun clear by then. After a short interval we ran the gun back and started firing. This was done several times and was most successful and as we are situated it is really the only thing we can do as our gun while in the pit is right in the open and a most conspicuous target to the enemy who know the range to a yard. As I said before having guns on the firing line is unprecedented in any modern warfare and artillery is supposed to be always under cover and able to change its position. It was quite like old time for me to get back on to the firing lever.

We heard that good progress had been made by our forces at Achi Baba and we had to keep the enemy busy during the night to allow them to dig in and get cover after their advancement.

A sham attack was planned and all along the line cheers were loudly sounded, brilliant start shells were fired off lighting up the ridges and to give the Turks an idea we were advancing. For some reason or other the Turks lit fires near their quarters and whether it was to show up our men if they came one could not tell. 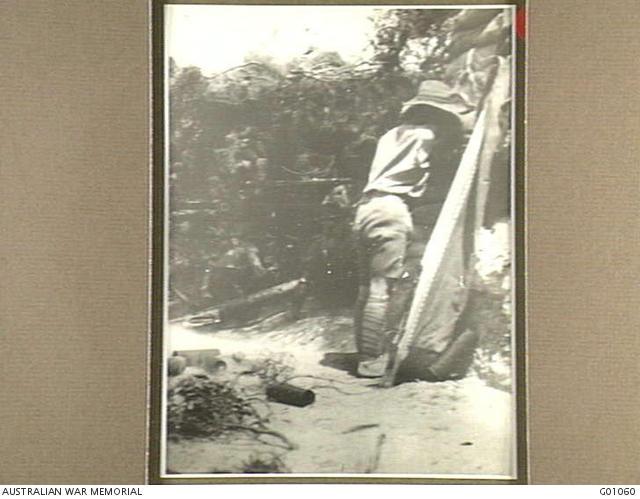 No. 3 (Ross Gun) of Hughes Battery in action - the gun was firing direct at about 1700
yards in full view of the Turks, who directed three shells on to its emplacements, one of
which damaged the gun.  This is the actual photo taken by Captain C. E. W. Bean as
mentioned above by Bombadier Sparkes (& again further below by Bean himself).
[Courtesy of Australian War Memorial - G01060]

The Southern force at Cape HELLES made a strong attack on Turkish position + to prevent reinforcements being sent by Turks from ANZAC a holding attack was ordered to begin at 1pm + continued until about 6pm.  The Battery fire was directed as follows

No 1 Gun shelled an Observation Station on KABA TEPE + then searched the whole of that headland firing 70 rounds.  The 5th L.H. Regt which had advanced from CHATHAMS POST on to A ridge now came under rifle fire from TWIN TRENCHES so a steady rate of fire was kept up during the afternoon on these trenches firing 36 rounds.  20 rounds were also put into reinforcements coming towards these trenches.

No 2 Gun engaged bastion on PINE RIDGE putting in 13 rounds.  The gun then came under a hot fire from Gun Ridge + got a shell through top of shield + slightly damaging dial sight.

No 3 Gun put in 10 rounds on CHOCOLATE trenches where rifle fire was being brought to bear on the advanced L Horse.  No 3 then shelled ECHELON Trenches which were also firing on our men putting in 23 rounds.

No 4 Gun shelled the trenches on PINE RIDGE to cover the advance of the 9th + 11th Infantry from our centre firing 34 rounds.  3 rounds of HE were also fired into TURKEY KNOLL + 6 rounds were fired in the direction of LONE PINE where it had been reported that reinforcements were gathering. 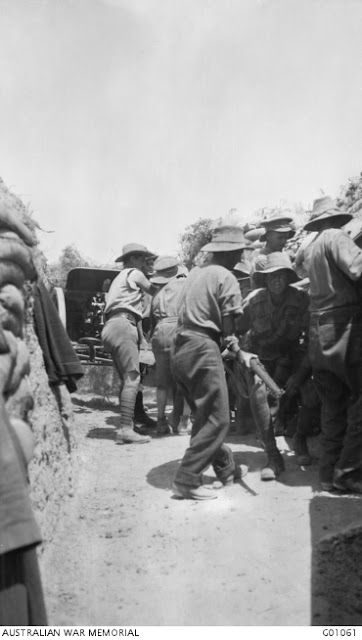 Whilst in action, No. 2 Gun of Hughes Battery was damaged by a Turkish shell (mentioned
by Major Hughes above) - photographed by Captain C. E. W. Bean, the gun is being moved
to a new position, where the damaged part was replaced and the gun used again later that day.
[Courtesy of Australian War Memorial - G01061]

Generally a very busy day. A big attack took place in the south and we here made a demonstration in order to pin the troops here to their ground. We fired about 700 rounds of Artillery Ammunition in my Section. Some of our troops moved out to feint attack. There were a number of casualties, but how many I do not yet know. The Southern troops made a fine advance and took a new position. General Cunliffe Owen lunched with me. Howitzer Battery registered more targets.

[Extract]  At about 1 I got a note from Blamey telling me that the right was a pretty good place to be at - Ryrie's or MacLagans H.Q.  I went straight to Ryrie's.  It turned out that at 9.30 we had recd a request from D.H.Q. to do something to keep the enemy from sending troops south from here.  The plan was hurriedly drawn up by Col. Skeen + Col. White + was taken out by Blamey to the 2nd L.H. Bde + MacLagan at 10.30.  Both Skeen, + the Bde Commanders said at once :Why didn't they let us know earlier!

However - the scheme was: (as worked by the Brigadiers):

The 2nd L.H. Bde was to send out about a Regt to move in the direction of the Echelon Trenches (which are on the slope of the first? ridge to the south of us).  Near Echelon Trenches are some old pits with brown brushwood around them (the Turks never renew the bush in front of their trenches).  The L.H. were to make for these + pretend to attack the enemy from there.  Meanwhile 2 Coys of the 9th Bn were to go out + attack in the direction of the south of Lonesome Pine (Snipers Ridge).

I went to No 3 gun which looks out through an embrasure in the line (I can't imagine why it has not been knocked to blazes - they fire about 3 shots + then withdraw it behind the corner of the embrasure - but in normal times it stares out straight behind a little sacking + brushwood).  Lt Ross is in charge.  The L.H. had gone out about 20 minutes by the time I got there + through the sacking you could see them lying up against their edge of the ridge.  A little way south of them on the other slope of the ridge + running at right angles across the middle of a yellow wheat paddock were some rows of sandbags - Echelon Trenches.  They were quite impossible to take + hold because the Gun ridge trenches stared straight down onto them.

It was just about 2.30 when, watching fr There was a crowd in the observation post of Hughes Battery where Col. Ryrie went, + so I watched for a time from No 3 gun.  Presently Col. Ryrie got this gun to fire 6 or 8 rounds on to Twin Trenches.  About the 7th Round some gun on Gun Ridge opposite opened fire (they hate this battery) + a shell lodged exploded in the bank outside the embrasure.  Presently a second shell exploded on the edge of the embrasure - Then bang - the whole place filled with dust + a third exploded right in the mouth of the embrasure.  "Withdraw gun," shouted came the order from the Battery Commander.  The men got dray ropes, hauled the gun round, drew it about twenty feet down the track + left it there (I got a photo of this).

I went to the observation post as it was too hot in the gun pit.  There were Foster, Maj. Hughes, Col. Ryrie, Hogue, Capt Waite, + think) Capt Leslie - + part of the time Col. Arnott, Blamey + Onslow, + myself.  I was able to get a good look with my telescope through the loophole (which didn't give the post away).