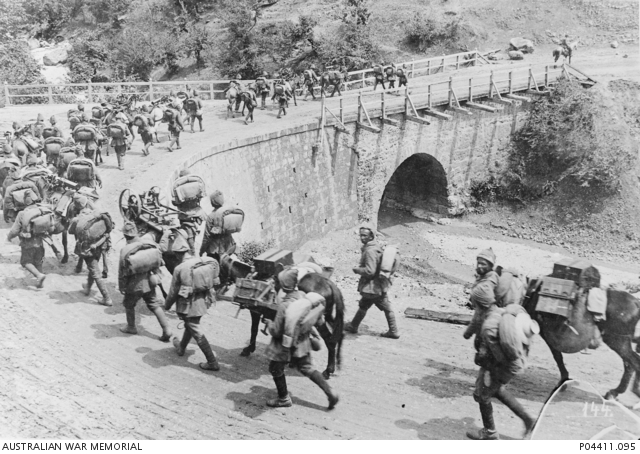 A Turkish Army machine gun company moving forward on a road down the
Gallipoli peninsula - each section is made up of three mules, one carrying a
Maxim machine gun, followed by another mule carrying a German Type MG99
sledgemount or wheeled carriage for the machine gun and the last mule is
carrying boxes of ammunition - this is likely similar to the mule convoy
spotted by Captain Waite below.
[Courtesy of Australian War Memorial - P04411.095]

6AM A large body of Infantry, with mule pack train was observed moving from behind the Southern end of Olive Grove in a SE direction.  I estimated the strength about 1000 + reported same, they being too far off for me to engage.

6pm I searched the position lately occupied by Turkish Gun in the vicinity of Square 224 P4 the Range 2100 appeared to be effective.

6.45pm A Small Turkish Convoy consisting of about 30 pack mules + 10 light vehicles were seen moving along the foot of Hill 706 in a Southerly direction, they were travelling at about 7 miles an hour + at large [illegible] + I considered them too far off to be engaged efficiently.

An exceedingly hot day. We shall find the summer fairly trying and the flies an awful nuisance. Enemy has been very quiet today and this evening. No artillery fire at all and practically no rifle fire.

Is he changing his dispositions and massing for a fresh attack or is he feeling he has had enough to go on with and wants a rest? Major Burgess completed his new observing station and my new station is under weigh. Artillery road behind position further advanced today. Artillery promotions out. Capt Lloyd will be very dissatisfied, but everybody else will agree the fair thing has been done. A monitor joined the Destroyers here yesterday, but steamed away again in the evening. I understand we are to have three stationed here.

Our big mail has not yet been delivered. The Authorities are very slow.