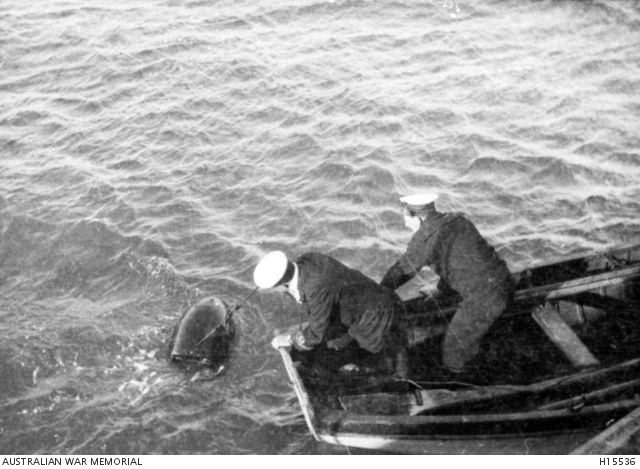 Sea mines & submarines were a constant threat to troopships heading through the Aegean
for Lemnos & Gallipoli - the above photo shows two sailors, in a boat lowered from the
transport ship Clacton, securing a drifting mine as the ship was returning to Lemnos Island
from Gallipoli in July 1915.
[Courtesy of Australian War Memorial - H15536]

I wake early to find a very cool and crisp and strong breeze blowing. We were now amongst the Islands of the Agean Sea. We passed several very high ones. The waves were lashing themselves into a white foam with the breeze but no sign was yet discovered of a submarine.

It is deliciously cool & the Southland is wonderfully steady as we steamed along on the face of a very strong wind. Passed a lot of Islands & we were still going when I retired.

Mrs. J. Pacey, Moggill Creek, Kenmore, has two sons, both of whom are serving their King and country.  One of them is with the 2nd Light Horse.  The other - Gunner W. L. Pacey, 7th Battery, 3rd Brigade, 1st Australian Division Field Artillery - writes: "Dear Mater. - Just to say that I am alive and kicking.  I dare say you are worrying a good deal over Jim and I, but there is no need.  We are well looked after.  We get fairly good tucker, an ample supply of underclothing, blankets, boots &c.  Things have been what you would call lively these seven weeks.  There are six of our detachment living in one dugout, and of an evening we soak the biscuits in water till they are soft, fry them in bacon fat, and then spread them with marmalade, and I can safely say they go 'bosker.'  I am in with good mates, and if any of us are off colour, the others do all they can for one.  It is real comradeship here.  The only thing we are short of is reading matter.  Wish you would send us along a 'Courier' now and again.  I have had some good sport since landing.  Of course you know where we are.  I have seen war in all stages - navy shelling at forts, forts shelling navy, submarines sinking cruisers (a sight I don't want to witness again), aeroplanes (both friendly and enemy) dropping bombs, infantry charges and artillery duels, and I may add I have had some narrow squeaks.  Bullets are a mere detail.  Shrapnel is common, but it makes one feel funny when an aeroplane is trying to drop bombs on top of one.  'Jack Johnsons' are not the nicest ones to meet, either.  On one occasion, when the enemy were charging, we popped shrapnel into them, and after they retired we (the artillery) ceased fire.  I got my rifle and a couple of hundred rounds, and went into the pit.  I can account for five Turks; it was the best day's sport I have had since leaving Australia - Kangaroo shooting isn't in it.  The sandbag under my rifle was simply riddled.  One bullet came through and hit me in the neck.  It was only a graze.  The bullet was red hot when I picked it up.  This was nothing.  Shells were bursting everywhere, and one high explosive burst just in front of me, and between the fumes and the sand my eyes 'copped out.'  Jim Milne is O.K.  I haven't seen our Jim since landing; the 2nd Light Horse are on the left, and we are on the right.  I met one chap who said that Jim didn't get away with the first lot - that he had a kick from his horse, and was laid up in the hospital.  Rotten luck, isn't it?  Well, I will give you all the news if I have the good luck to get back.  Writing paper is scarce; this is out of a biscuit tin."


A letter written home by Billy, as published in The Brisbane Courier on the 30th July 1915.
[Courtesy of National Library of Australia - Trove]

7th Battery did not fire.