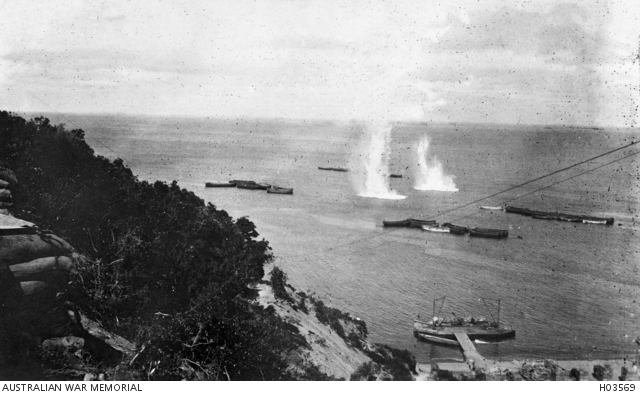 Looking seaward from the heights above the beach showing Turkish shells bursting
in the water close to Australian boats.
[Courtesy of Australian War Memorial - H03569]

Met young Burns and also A.S. Office Boy. I forget his name. It was quiet last night except a little splash about 11PM. to-day it is a little cool. Saw Col Rosenthal. Our aeroplane was up today and the Turks had a number of shots at it and also at the Trawlers anchored out off the shore. I am told by all those who saw the Triumph sink that it was a great sight. I missed this while at Alexandria wounded. I read a report on the fight at Achi Baba for 3 days in which our boys & NZ and the Imperial Division figured so bravely. It was a splendid spectacle.

To-day unfortunately I had to take charge of the prisoners to see they did fatigues. 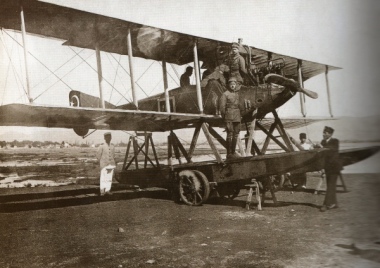 During much of May and June 1915, both sides tried, unsuccessful, to use aircraft as a stable
bombing platform against their opponent's troop concentrations - on July 5th, the Turkish
Army received the first two samples of the vaunted Gotha Airplane from Germany (the
above being one of those utilised on the Gallipoli peninsula by the Turks).
[Courtesy of Turkey in the First World War]

"Fourteenth for tea." This is a call I have just heard. 7 AM. I have slept soundly and no enemy’s guns or rifle fire to awaken me this morning.

Inspected pit for new Howitzer. It is now complete. Squaring up gun emplacements generally. Major Hughes very unwell. Was out with Col Hobbs this morning setting out Artillery road for the Engineers. He looks dreadfully ill and will I am sure collapse altogether unless he takes a change at once. He has been suffering from dysentery for some days. Making arrangements to fit all our Brigade phones and lines underground, to be safe from big shell fire. Aeroplane over a good deal yesterday. Enemy’s plane rose up from Maidos this morning but did not come over our lines. Monitor demolishing enemy’s trenches around Gaba Tepe. Burgess had a premature at no 1 gun. No damage done. Enemy got a shell into a water barge this morning. We thus lose 4 days supplies. Well are however giving plentiful supply. We hear the troops in the South have made a substantial advance and taken many Turkish trenches. Also that it is intended by the enemy to use Gas against us as the Germans have done. All ranks however have neutralising respirators, so brother Turk will get a surprise. Benson away making sketch of No 2 Section Anzac position.

We have just received for neighbours in our locality the 9th Battery 3rd Inf Bde, about 1000 men. They May be good soldiers, but they are a terribly rough crowd, and their language is lurid and obscene. The latter alone should scare the Turks. Bligh returned from "Cardiganshire" at Imbros, bringing with him a nice lot of photos from the Chief Engineer and a box of groceries as a present from the Captain. Both very acceptable. He sent condensed milk, cocoa, coffee, peas, tinned apricots, sauce and some butter, the latter being a luxury. We have had none since April 25th. A piece of cake was thrown in.