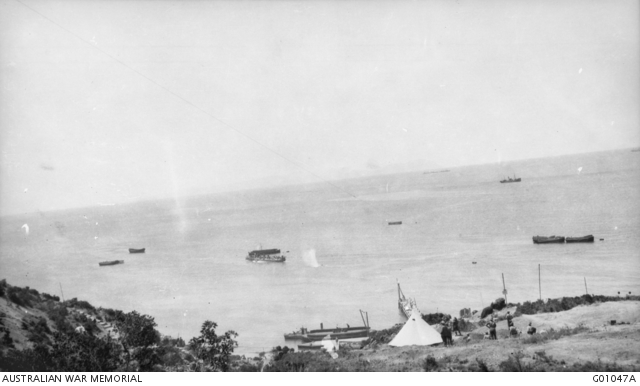 Boats off the peninsula under fire from "Beachy Bill," similar to the incident
mentioned by Major Hughes below - a water spout fro ma shell burst can be seen
at centre, just right of two vessels.
[Courtesy of Australian War Memorial - G01047A]

Enemy still sapping forward over ridges in front + bringing their trenches closer to our lines.  At 4pm a trawler bringing stores was hit by a Turkish shell but she got clear.  About 7pm Brighton Gun was shelling enemy in their trenches when one of our shells burst in 9th Infy Batt lines killing 2 men + wounding 12 (including 5 officers). 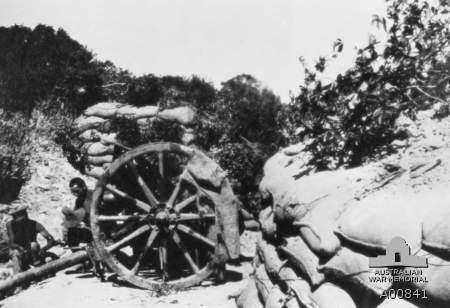 One of the 9th Battery's field guns, taken in June 1915, & possibly responsible for
the fatal shell fired into the 9th Battalion's trenches.  The Australian War Memorial
notes, "On 3 June, the leadership of the 9th Battalion was hit hard when a shell
fired by 9 Battery, Australian Field Artillery, exploded prematurely over the 9th
Battalion positions. Among the wounded were Major Salisbury, Captain Plant and
Lieutenant Wilder-Neligan. Evacuated to Malta, he was impatient to return to
Gallipoli, and as he neared recovery, discharged himself from hospital and caught
a ship back to the peninsula, re-joining his battalion on 4 August. He was immediately
promoted to Lieutenant, and the following month to temporary Captain and
battalion adjutant."  Amazing, the incident is completely missing from the official
Unit Diary of the 9th Battery, as penned by Major Burgess, short of, "last shell
premature in vicinity of SAPPER'S POST" - Sapper's Post was located at the extreme
right flank of the 9th Infantry Battalion's position, & had only just been reinforced
by men of the 5th Light Horse Regiment on the 31st May 1915.
[Courtesy of Australian War Memorial - A00841]


Interview with General Carruthers explaining result of yesterday’s shoot. He was very pleased. Interviewed Engineer officers and pointed out what is required for Artillery Road. With Major Hughes tabulated result of yesterday’s shoot and recorded same on D.A. map, forwarding same to Major Anderson at 10.30 AM. Heathorn and Brand returned to duty from D.A. H.Qrs. Visited Burgess’ guns this afternoon and had interview with Capt Trenchard re position of 6" Howrs. B.A.C. detachment preparing improved Roadway from our Head Qrs to beach and to Head Qrs of 3rd Infantry Brigade. Orders today record Honours and rewards conferred by the King on some of our officers and men. All richly deserved. This afternoon H.M.S. Doris put about 100 rounds of 6" stuff into Hill 971 and vicinity, her broadsides of 6 guns speaking at once.

A very unfortunate accident happened this afternoon. Major Burgess was shooting over our own Troops, when a premature occurred, due to a faulty fuze. As a result 2 men were killed and 11 wounded, among the latter being 5 officers. Enemy attacked about 9.30 PM but were driven off with loss. We also hear the Turks attacked our Southern troops yesterday but were also beaten off with heavy loss.

B.A.C. detachment at work on new track. With Major Brown selecting positions for gun emplacements, so that guns may be moved into them at any time, day or night.

Col Hobbs informed me more Howitzers were being landed for us.