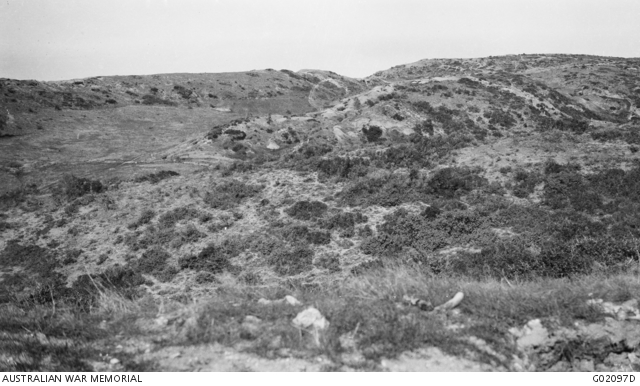 View showing Bolton's Hill (where the 7th Battery were placed), Chatham's Post and
Balkan gunpits to Gaba Tepe, taken from Sniper's Ridge - one of a series of photographs
taken on the Gallipoli Peninsula under the direction of Captain C. E. W. Bean of the
Australian Historical Mission, during the months of February and March, 1919.
[Courtesy of Australian War Memorial - G02097D]

This morning our Turkish friends could be seen working near the old Balkan Trenches (Some of which were used in the Balkan War) and are not far from our firing line. Old Pip-Squeak – a gun off gun ridge sends a few shells over every morning to our lines. All you hear is a Pip noise then a squeakish sound – hence its name.

Saw Harry Tiddy to-day & young Lieut Chambers. It is remarkable when one considers the savage unscrupulous the Germans are displaying in this great war. It seems now to speak of the wild beast at bay. To secure a quick decision he suffocates his opponents with poison gas. He endeavours to terrorise and unnerve us by dropping incendiary bombs amongst our inofensive civilian population of England. He resorts to all kinds dastardly outrages to secure the end he seeks.

From our gun pit outlook the orders of several of our men who fell yesterday can be seen on a far ridge in the deep of death. Some bodies were secured last night and as I went down from our pit after 10pm I saw them laying them away in their last resting place.

Within our battle field some have telephones water pipes and other conveniences are being added every week. The advance made by our Troops at Achi Baba is described as splendid and even better than had been hoped for.

Quiet except for a rounds of gun fire from Enemy.  At night a storm came up + Turks evidently expecting an attack blazed off a lot of ammunition

Assisting Howitzer Battery with emplacements and registration of further targets. Generally a quiet day, though at night the Turks attacked on our Left and were badly beaten off. Down South good work has been done, and advanced positions taken.

[Extract] I went up to the H.Q. 2nd L.H. Bde on our right in order to get the complete account of yesterday's fight.  Whilst I was there Olly Hogue was going for a bathe so I went too.  went back Curious scene, all these figures there on the beach, naked, in absolute darkness.  Went back with Olly + the local Padre (who has learned to tell a good story in the dialect); + whilst I was in Olly's tent a thunderstorm which had been moving up began to break - at least a heavy wind came up.  The flap over the mouth of Olly's dugout began to flick about like a half furled sail + suddenly the Turks set up a heavy firing.  The bullets whisk into the green at the back there fairly fast.  I thought we had better go + see.  The 2nd Bde H.Q. had no news of a Turk attack so I went on to the 3rd Bde H.Q.  Col. Maclagan was there + Ross.  Ross had no doubt as to what was the matter - "It's this wind!" he said.  "They can't see through the dust + they think we're attacking.  I'll go out + tell the 12th to cheer and see what we get."  Presently he returned + at the same time there was a further outburst of Turkish firing + a machine gun began traversing over our heads backwards + forwards "That's all for headquarters!" said Ross.  "The Tasmanians of 12th think it a great game - they were delighted!"