I was up before daybreak to bid good day to the ocean swell. I noticed our Bunk mattresses were all filled with sea grass that one sees collected on any ocean beach. It seems to be a soft clean material for this purpose and no doubt it is washed before using to take any salt out.

We had a parade at 11am. Saw old 15 lber on board – Waiting for the approach of a Periscope has an element of excitement in it.

Surrey Yeomanry detachment on board.

It was a cool day with a very small sea.

4pm The enemy opened a general bombardment of our position.  Battery on Gun Ridge was engaged by No 2 Gun which after firing 21 rounds was put out of action by a direct hit on right side of shield damaging spring case + cradle + carrying away ranging gear + No 2’s seat.  This gun was withdrawn after dark to the beach for repair + No 1 Gun run up into No 2 Gun pit.

A few enemy’s shell came in early this morning. Later in the day Major Browne opened fire on a target and in a few minutes the bulk of the Artillery on both sides was engaged. Three shell landed close to my Headquarters coming from a new direction, one bursting within 20 yards. We are accordingly putting up a few more sandbags today for extra protection. During the cannonade Major Hughes had his No 2 gun temporarily disabled. The shield was pierced by a shell, range drum smashed, and sundry other damage done. Luckily the detachment had been withdrawn a few minutes earlier. Another gun was promptly exchanged for the damaged one. Major Hughes has now had 3 guns knocked out since the action commenced. The 3rd Inf Bde sent out a party last night to fill in some enemy trenches and if possible get the infantry digging them.

I have not heard the result.

Heavy cannonade down South all day. A very quiet night.

Again very quiet morning and day generally. Benson has been busy on sketch of No1 Section Anzac Position, showing panorama of Enemy’s country. The General says he will have them printed and distributed officially for use. As I write at 7PM the Olive Grove Battery is vigorously shelling the beach. Major Burgess is just getting on to him, so I expect he will soon ease off.

All our destroyers bolted off Southward about noon today, rather indicating that a Man O’ War or Transport had possibly been torpedoed. We have however had no particulars. Flies, flies, everywhere – a dreadful nuisance. Very quiet night. Glorious sunset. Benson proposes making a water colour from my "Residence". 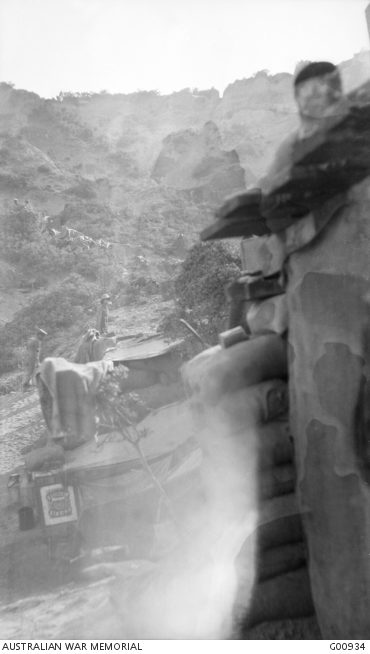 A gun position on Plugge's Plateau, with another Anzac gun in position just to left
of the niche in the skyline - taken by Captain C. E. W. Bean in June 1915.
[Courtesy of Australian War Memorial - G00934]

Centenary of Quatri Bras.  Casey tells me that he was in Brown’s battery when the 8 in shells from Kojadere (or a little N of it) came in.  You could see them coming + see which way they were going to fall.

The gun at Anafarta has been giving the Beach a heavy shelling at intervals all day – + the K. Tepe gun has been shelling it from the South.  For some reason the Anafarta gun gets the hospital almost every time after searching the gullies.  We have no aeroplane + no sea plane so I don’t suppose we have any chance of knocking these guns out.  The Anafarta gun killed 2 + wounded 14 men on the beach today.

The gun ridge guns, possibly 6 of them, gave Hughes battery a heavy shelling.  The crew had just left no 2 gun when she got a shell thro the shield which played old Harry with the sights + knocked them away rendering the gun useless for the present until the sights can be repaired.  I think our guns are very inadequately hidden, but of course it’s difficult to find positions.  Trenchard thinks his 6 in Howitzer knocked out one of their guns today on 971.

Altogether they had 18 guns at work against us today (Col. Hobbs says - ) of course its hard to place their number because they have so many alternative positions.  There were 4 to probably 6 on Gun ridge.

The small destroyer was giving the trench the N.Z. people lost a very heavy shelling today – blazing very fast with her little long 12 pdr.  There were Turks in it today + some men told me they thought they saw a Turks body fly into the air.

This evening two enterprises: 1: Blowing up a saphead at Quinns; 2: raiding of the double trench by party of 9th helped by destroyer.  Destroyer turns on searchlight at 9.30 + fires + we follow slowly on after the searchlight.  The men are not to stop out – just clear the trench + come back.  The Quinns business I think (by the noise) took place at 9.30 when tremendous bombing + rifle + m.g. fire.

The Frenchmen had one of the Anafarta Shells in above their dug out today – a little 12 pdr or 15 pdr I should say – with high explosive, or else percussion shrapnel.  We have no high explosive ammunition for our 18 pdrs.  Wish we had.  It has a nasty noise – that same crrrk! that we notices from the Enemy’s big shrapnel falling over the beach at Helles.

Waterloo number 01 “Dinkum Oil” ready.  Col. Smith is putting the fear of Heaven into the reinforcements – believes in knocking them down + then slowly building them up.  It is the best way undoubtedly.  They come here with big ideas – they’re not fit to compare to the old Mena trained men; + the first thing is to make them realise it.  They have a tremendous secret admiration for the old hands + are just in the frame of mind when they can be knocked down by a socking big load of hard drill to start off with.  Then, when they are lamblike, they can be put on.

I saw Smith choosing the Corpl. for the waterguard yesterday.  He had to provide an N.C.O. + 4 men + the question was – what N.C.O.  He pulled out a man that had his testimonial for the job written on his face.  Who can we spare, Kennedy?  He asked.  Must be a trustworthy man but a man who – well-er-whom we can spare from the trenches.  “How about Corpl. X?” said Kennedy after a moments thought.

Smith called up Corpl. X to show me.  He was exactly the man.  “You mustn’t let them have an ounce more than is their due, X” said Smith.  “You must treat our own men exactly the same as these other Bns. You must see that the rules are exactly kept-”  “I see” said X slowly + smiling with intense satisfaction at his own intelligence – “I understand, Sir that if I do a favour-to-my-own-men-I-am-robbing-somebody-else.”  “That’s so” said Col. Smith nodding.  X saluted slowly + ceremoniously + with intense pride beaming out of all the five parallel wrinkles of his honest wooden old smile, went turned formally about + strode away.

I now know the sort of man they put on fatigues.  Well – he’ll do his job to the letter, that man.